He is the former chairman of Alumni Society of Association for Overseas Technical Scholarships Kerala. 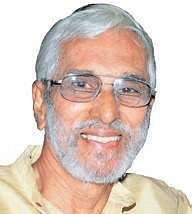 KOCHI: Edgar Morris, 81, of Kochi, has been conferred one of Japan’s highest civilian honours, the Order of the Rising Sun Gold & Silver Rays with the Emperor’s Medal of Honour, according to a notification by its Ministry of Foreign Affairs. He is the former chairman of Alumni Society of Association for Overseas Technical Scholarships Kerala (ASAK) and won the honour for ‘contributing to promoting friendly relations and mutual understanding between Japan and India’.

Morris is the founder president of ASAK and headed it for nearly three decades in various capacities. Former managing director of Delhi Metro E Sreedharan and former Advisor to Prime Minister T K A Nair are the only other Malayalees to have received the honour.

Stay up to date on all the latest Kochi news with The New Indian Express App. Download now
(Get the news that matters from New Indian Express on WhatsApp. Click this link and hit 'Click to Subscribe'. Follow the instructions after that.)
TAGS
Edgar Morris