A ring of gratitude for those who helped

For 45-year-old artisan Rajagopal Paddiyil, ornament making is not just his profession albeit he breathes life into his works with the addition of new concepts.

KOCHI: For 45-year-old artisan Rajagopal Paddiyil, ornament making is not just his profession albeit he breathes life into his works with the addition of new concepts. One such work of art is the unique puzzle ring that he sculpts based on different themes. His latest work is based on the theme of the seven emirates of the United Arab Emirates. 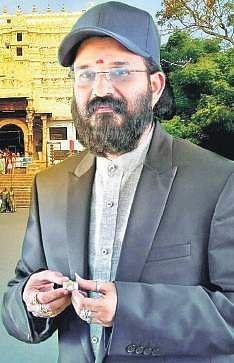 The highlight about this ring is that it has been designed in the form of a puzzle with seven-band ring layers which when dismantled, shows the seven different emirates such as Abu Dhabi, Ajman, Sharjah, Dubai, Fujairah, Ras Al Khaimah and Umm Al Quwain. Rajagopal has made this ring as a symbol of extending his gratitude to the UAE who helped the state at the time of floods.

“I thought of making this ring in order to show my gratitude to UAE who extended their helping hand to us at the time of floods. They provided us with relief materials both in cash and kind when the state was ravaged due to the floods,” says Rajagopal.

Belonging to a Vishwakarma community, Rajagopal has shown his expertise in crafting designs which are unique in style and appearance. Be it a headgear for the gods or making sculptures, this artisan does it with ease.

Being a travel enthusiast, he says, “I have been visiting many temples since my childhood. What I liked most during those travels was the sculptures, especially that of the Chidambaram temple which has some of the best bronze image representations of Lord Shiva”

This is his second themed puzzle ring after ‘Indian Vismayam’ which included several national symbols. Like this ring, the former was made of five rings which when assembled together, displayed the country’s name along with engravings of the national flag, national emblem, national anthem, national animal, bird, flower and tree.

It was made using ‘Panchalokha’, a five-metal alloy that includes gold, silver, copper, zinc and iron. Besides making creative rings he is also wrist-watch expert.A wrist-watch made 15 years ago was gifted to the Queen of Travancore. “I also make customised things for people. I think  I have now reached a position where I can try my luck in all kinds of jewellery designing . In the future, I would love to make many more theme-based puzzle rings,” he adds.

Stay up to date on all the latest Kochi news with The New Indian Express App. Download now
(Get the news that matters from New Indian Express on WhatsApp. Click this link and hit 'Click to Subscribe'. Follow the instructions after that.)
TAGS
Rajagopal Paddiyil Ornament making Vishwakarma community Ring of Gratitude