KOCHI: Nature and novelty. If you thought these two cannot gel well, you thought wrong. When a new thought provokes the need to preserve the things around you, it is art. The exhibition titled ‘Embedded’ at the Durbar Hall Art Gallery in Kochi opens up a world of visceral experiences. And one is left with the bitter aftertaste of ‘what if’ and ‘is it too late now’. 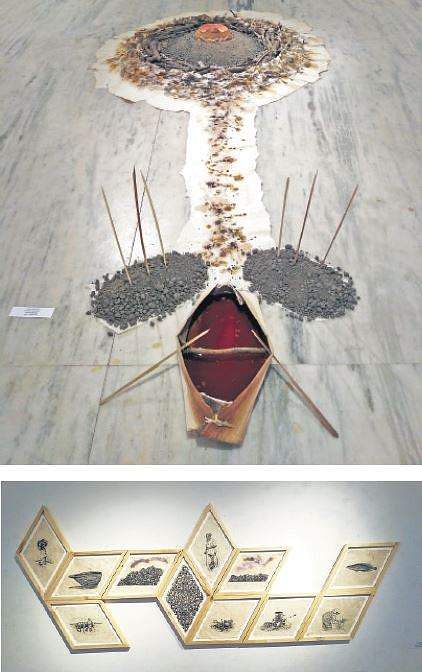 Sajith, through his watercolour on paper artwork ‘His Greed was Undoing’, explores the direct impact industrialisation had on the avian species. His work on a woodpecker pecking on logs of wood mounted on a transport vehicle hits hard. His paintings portray nature at the hands of the ruthless exploitation by the human race.

Jagesh, on the other hand, has used acrylic on canvas to explain how man’s endless greed and obsessive nature of consumerism have led to the destruction of things dear.Akhil, however, has taken a different approach. He criticises modern mechanisation and is nostalgic about tradition simultaneously.Satheesh’s works ‘Black-winged Spinal Cord’, ‘Babel’ and ‘Ballad of Green’ tread on the themes of the inherent human nature and how it is connected to nature.

Sajeesh’s artwork deals with different aspects of how human beings deal with their inherent nature to conquer and exploit.“My works are inspired from the immediate realities like a dream, an emotion or a thought. It is basically about life,” says Sajeesh.

Touching upon the theme of man’s fight to survive, Prakasan’s three art installations invoke curiosity and thought in viewers. He explores how man depends on folklore and beliefs in their everyday life. “In one artwork, the theme of exploitation and victimisation is explored. Sometimes, man is not aware of this. But this is essential for survival,” says Prakasan.The exhibition, which began on November 8, will be on till November 15.