Child sexual abuse is not a myth but a horrifying reality.

KOCHI:  Child sexual abuse is not a myth but a horrifying reality. With the advent of the internet and other electronic innovations, the number of children being abused has increased. It has become easy for the perpetrators to connect with like-minded perverts across the world. According to Cecilia Wallin, Criminal Intelligence Officer with the INTERPOL, around 2.4 million instances of online child sexual abuse was reported from India in 2017.

Wallin was in the state for the Cocon 2018 conference that saw experts from around the world deliberating on cybercrime.“Every year, the number of children being raped, abused and killed for the sadistic pleasure of paedophiles is increasing,” she said. “These children, whose images are being circulated by the offenders online, are real persons. The National Center for Missing and Exploited Children (NCMEC) based in the US reported over 2,446,884 reports of online child sexual abuse happened in India in 2017. Till August 10, 2018, the International Child Sexual Exploitation (ICSE) database identified around 14,899 victims in India.” 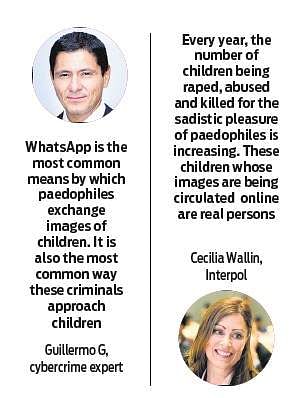 The advent of technology is the reason why there has been a spike in the number of victims, said Guillermo G, a cybercrime expert. “WhatsApp is the most common means by which paedophiles exchange images of children. It is also the most common way these criminals approach children. Facebook is also a platform where the predators prowl. So, it becomes very pertinent to keep a watch on the internet habits of children and also to stop them from uploading their pictures online,” he said.

According to Cyberdome DySP E S Bijumon, awareness classes need to be conducted in schools about the various traps lurking in the cyber world.“Our education system should include the topic in their syllabus. Only through awareness will it be possible to prevent our children from falling prey to predators in cyber space,” he said.

Who are the child victims?
78 per cent of the reports involved girls and 15 per cent boys (In 8 per cent of reports, gender could not be determined)
Male and female children from 8 to 17 years. However, compared to girls, it was less common for boys to be on the younger end of the spectrum.
In 24 per cent of cases, reporters mentioned they suspected or knew additional children were targeted by the same offender.

More from Kochi.
Now we are on Telegram too. Follow us for updates
TAGS
Sexual abuse child sexual abuse Online Abuse