They may have lost a pet, a favourite study table or their story-books, and these are very dear and important to them.

KOCHI:  “The good news is that most people, despite going through a devastation like the recent floods in Kerala are highly resilient,” says Dr P J Saju, a Malayali psychiatrist based in Leeds, United Kingdom.
He had come recently to Kochi to conduct a one-day workshop titled, ‘Overcoming trauma through courage and compassion - creating better worlds’ which was organised by the NGO Bodhini. The participants included psychologists, counsellors, psychiatrists and teachers who are working with the survivors.

“They may appear helpless,” says Saju. “But it is very important that when you deal with them you should regard them not as a victim, but a survivor. Your task is to rekindle the strengths which have been affected by the trauma.”Interestingly, more than the men, it is the women and children who feel the stress more.

“The women usually suffer from Post Traumatic Stress Disorder (PTSD) because they are dealing with the family all the time. It also depends on the extent of the damage. What has been the loss? If they have lost their livelihood, jobs, house and property, they are under more stress.”As for the children, most of the time, adults do not spare any time to listen to them.

They may have lost a pet, a favourite study table or their story-books, and these are very dear and important to them. “The effect is far more than we can imagine,” says Saju. “Teachers can have a good impact by listening attentively. Their painful loss has to be acknowledged. If children are not given an opportunity to grieve, they will shut down. There has to be some activity where they can express their feelings of loss and grief.”

And Saju urged the counsellors to settle in for the long haul. “You have to work with the survivors from one to three years,” he says. “Especially for those who have lost their family members. They have to come to terms with their loss. Calm talk, calm actions and calm explanations will help.”
According to Saju, around 30 per cent of the affected people will have severe emotional problems that will prevent their return to normalcy. 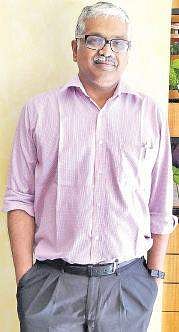 “Survivors can talk it over with their relatives. For those who have strong religious beliefs, if they take part in rituals at a church, temple or mosque, that can have a healing effect. Having a talk with a priest, pujari or an imam is also helpful. This enables them to express their sorrow and get over it. Our social capital, as compared to Western countries is our greatest asset.”

Saju says that going through a trauma does not necessarily inflict a lifelong psychological scar.
“It might bring out the best in people,” he says. “They might become better human beings and value life more. Some might discover hidden strengths. For example, people may try a new business which might be successful. In Western psychology, this is called a post-traumatic growth.”Saju also told the participants that they could go through a difficult time even as they are helping the survivors.

“That is because your compassion is awakened,” he says. “So, you will also be affected by all the stories you hear. Hence, you will have to find ways to shield yourself: go for regular exercises, spend time with the family, see a film, or an art exhibition, listen to music or do some reading, and visit a place of worship, all this can help.”

Personal life
Saju grew up in Kochi. He did his graduation from Sacred Heart College, Thevara then completed his MBBS from Calicut Medical College in 1990. Thereafter, Saju went to CMC College in Vellore where he got his MD in psychiatric training and worked there for six years. In 1997 he went to the UK.
Today, he runs a transgender clinic at Leeds city as well as a cognitive behavioural therapy clinic at a place called Wakefield.

Interestingly, he says, over the years, Britain has changed a lot. Earlier, they were known for their stiff upper lip but now the people are more revealing of their emotions. “The change occurred when Princess Diana died in a car accident in 1997 and there was a public outpouring of grief,” says Saju. Also, multiculturalism is playing its role. As the Britons live with people from different cultures and ationalities, they are beginning to shed their reserve.

Meanwhile, as he grows older, Saju feels the need to get back to his roots. “I come at least twice a year to see my mother who lives in Kochi and also to meet up with my friends and relatives,” he says.
“So I am very happy that on this trip I was able to pass on my knowledge to all those who are in the forefront of helping the survivors of the devastating floods.”