Kochi: The nightmare is over! Wake up, creativity

The time is 10 am and a classroom in a tiny government school in Koratty is buzzing with frenzied activity.

KOCHI: The time is 10 am and a classroom in a tiny government school in Koratty is buzzing with frenzied activity. This is no conventional classroom and neither does it house desks and benches; instead a group of children are mixing clayey soil and water in a bucket, a couple of them are stirring away while one is pouring in water.

They are processing the clay to be later molded by the creative young fingers. This is a clay-pottery session of ‘Flood Art’, an initiative spearheaded by ‘Artists for Kerala’ in association with the Chalakudy based ‘Schools for Rivers’, for children affected by the August deluge.  Directing the enthusiastic lot is an artist from Mumbai, Ashitha Mall. 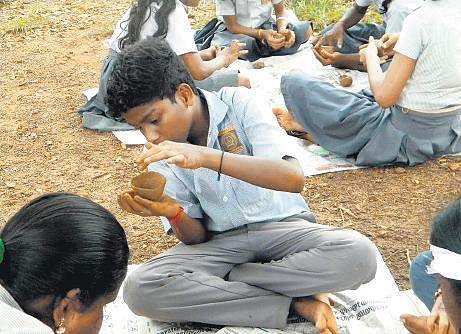 “Children are a powerhouse of energy and creative talent. We provide a food for thought for their young minds and they go about creating some beautiful pieces of work,” she says.‘Artists for Kerala’ is a collective formed by artists of different genres with an aim to voluntarily work with the children in the flood-affected areas.

They conduct workshops in different kinds of art, especially with raw materials readily available in nature, clay being just one of them. Leaves, stones, soil, flowers and fruits readily available in nature are used as colouring agents.“We are trying to provide a platform for children which will help them return to a normal life. We aim to teach them a form of art which they can pursue as a hobby,” says Blaise Joseph an artist and one of the torchbearers of the collective.

Apart from this, sessions are also taken for the teachers from the schools in such localities to understand the need to encourage the creativity in children as a method to overcome the trauma. Meanwhile, the children are done preparing the clay and it has been set out to dry. They are now giving finishing touches to the pieces of art they have molded using a previously prepared batch of clay.

Cups, plates, pen holders and oil lamps have all been laid out to dry and later baked. “We didn’t realise we could do this with clay. Many of us are going to try this at home too,” says Abhinav S, a Class VI student of the school.The experiments with clay done for the day, the children spill out on the playground and are soon engaged in a game of tag. Happy faces, the trauma of a deluge fading, and just being themselves.

More from Kochi.
Now we are on Telegram too. Follow us for updates
TAGS
Kerala government school