With the second refitment of INS Vikramaditya over, the country’s lone operational aircraft carrier will be entering the sea-trial stage by next week.

KOCHI: With the second refitment of INS Vikramaditya over, the country’s lone operational aircraft carrier will be entering the sea-trial stage by next week. The short refit, at an expense of Rs 705 crore, was carried out at the Cochin Shipyard and the aircraft carrier is now docked at Ernakulam Wharf, prior to the commencement of the sea trials.

During an onboard visit arranged by the Navy for media persons on Saturday, Commanding Officer of INS Vikramaditya Captain Puruvir Das said the refitment of the ship has been completed.

“However, a few tests, including the checks on the ship’s boilers, are underway. Soon, we will start the sea trials, which will take place off the Kochi and Goa coasts. We are hopeful of returning to the Western Naval Command without delay,” he said.

As part of refitment, major work was carried out at the hull of the ship. “We did Hull survey and paint scheme renewal. Also, repair work was carried out in the shaft system of the ship,” he said. The shaft of the ship comprises 25 bearing, of which 16 were replaced. Routines were performed on sewage treatment plant, ship’s main propulsion plant and on all weapons and sensors. “The refitment will enhance the operations of Vikramaditya. It will be ready for sea operations once the trials are completed,” said Captain Puruvir Das.

Commissioned in November 2013, the ship is assigned to the Western Fleet and is based at Karwar in Karnataka. The total designated crew strength of INS Vikramaditya is 145 officers and 1,600 sailors. The ships power generation and distribution section maintain 12 generators which produce 18 MW power that can power 100 villages. The 45,000-tonne ship is 285 metres long and 60 metres wide having 23 decks equalling almost 23 acres of land. 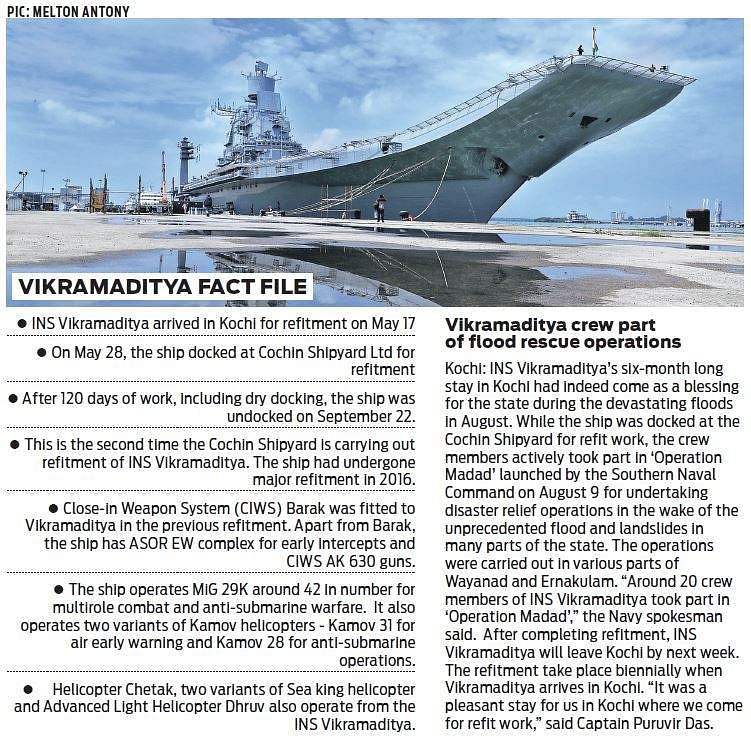 Stay up to date on all the latest Kochi news with The New Indian Express App. Download now
TAGS
INS Vikramaditya Cochin Shipyard