That ain’t a fair deal, folks!

Ease of doing business is not just about single-window clearance for setting up establishments or conducting big business events.

KOCHI: Ease of doing business is not just about single-window clearance for setting up establishments or conducting big business events. It also involves providing a hassle-free transport network and setting up of allied infrastructure facilities.

Ernakulam district, which is the hub of most of the industrial activities in the state and home to an active seaport and airport, is now crying for attention, thanks to pothole-filled roads and traffic-snarls at key junctions due to never-ending works. The state’s most-important district, which contributes the lion’s share to the state exchequer, can rightly feel aggrieved as the funds are diverted to other districts.
Before going into details, here are some statistics.
Ernakulam contributed about R19,000 crore or 50 per cent to the exchequer out of the total tax revenue of nearly R38,000 crore during the year 2016-17. Or conversely, taxes collected from 13 districts equalled the contribution of a single district to the exchequer.

In terms of spending by the Public Works Department (PWD), the data shows lower spending in Ernakulam vis-a-vis other districts/regions. For instance, in the year 2017-18, Ernakulam’s share of budget work expenditure is R135.58 crore, lower than Manjeri (R249.04 crore), Thiruvananthapuram (R153.84 crore) and Kottayam (R149.05 crore). Even districts like Alappuzha (R124.89 crore) and Kannur (R125.95 crore) get a bigger chunk of funds compared to Ernakulam’s prominence in terms of tax contribution or industrial/commercial activity.

Ernakulam is also the biggest source of revenue for the government from road tax. For the month of September alone, according to the Motor Vehicles Department, the district contributed R46.1 crore, way ahead of other leading districts such as Malappuram (R29.61 crore) and Kozhikode (R29.35 crore).
Deepthi Mary Mathew, senior research associate at the Centre for Public Policy and Research (CPPR), a Kochi-based think tank, says a major problem for a district like Ernakulam is lack of freedom for local self-government bodies to use the funds for developing infrastructure such as roads. For instance, she points out grants for specific purposes (tied funds) have a share of around 40 per cent in the total revenue receipts of the Kochi Municipal Corporation. “Tied funds are non-discretionary in nature and can be utilised only for specific purposes,” Deepthi says.

K K Krishnakumar, a fellow of Kochi-based Centre for Socioeconomic & Environmental Studies (CSES), however, looks at the issue from another perspective. According to him, the road network in Ernakulam is fully developed and hence the PWD needs to focus on less-developed regions for building new roads and bridges. “This may be the reason for high spending in other regions by the PWD compared to Ernakulam,” he says.

A way out of the mess of bad roads is to hold accountable an officer of the rank of assistant executive engineer when a road starts to deteriorate within five years of construction. Krishnakumar says the LDF Government should take steps to implement this proposal, which will directly put the responsibility for the quality of roadworks on senior PWD officers.

“What now happens is a lot of time is lost on tendering the work and awarding the contracts, by which time a small pothole would have become bigger, damaging more segments of the road,” he says. The contractors/PWD engineers should be held accountable for any damage for five years, Krishnakumar says.

Complicating matters for Kochi is the fact that areas lying close to the Corporation such as Thrikkakara (biggest tax-earning municipality housing leading IT firms at Infopark, Kakkanad) and Kalamassery (another big revenue earning municipality with Lulu Mall contributing a major sum) are all working independently.

Ernakulam MP K V Thomas has been advocating the merger of Kalamassery, Thrikkakara, Fort Kochi and Tripunithura local bodies with Kochi Corporation to form a Greater Kochi Corporation for better and efficient administration.

Deepthi points out the example of London where the Mayor has full powers. She says a similar experiment can be tried in Kochi as well. 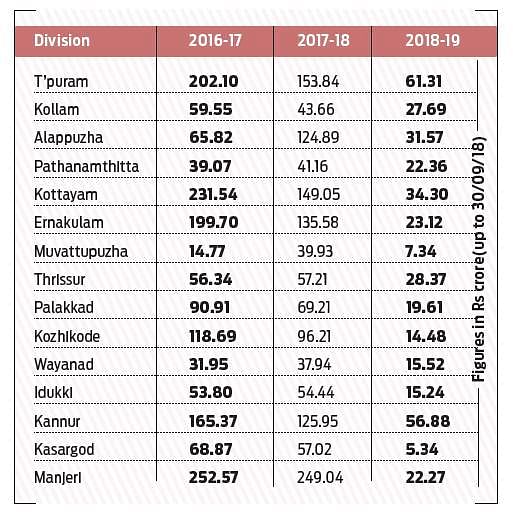