Despite numerous proposals, the city’s water transport potential has remained unrealised, thanks to poor urban planning.

KOCHI: Despite numerous proposals, the city’s water transport potential has remained unrealised, thanks to poor urban planning. According to the New-Delhi based Indian Council for Research on International Economic Relations, the city’s crisscrossing canals and rivers, linked to a backwater system can significantly impact its socio-economic and cultural development. Currently, the role of the ferries is limited to just being a link. All successful waterways all over the world depend on the efficiency of the transportation systems available at the start or end of journeys.

Lack of Connectivity
The National Transportation Planning and Research Centre which earlier made a study on the development of inland waterways of the city points to the resolving of the issue of connectivity. “Water transport should be regarded as a service-sector entity. To make them economically viable and passenger-friendly, the bottlenecks in the form of poor connectivity has to be removed,” said BG Sreedevi, Chief Scientist. 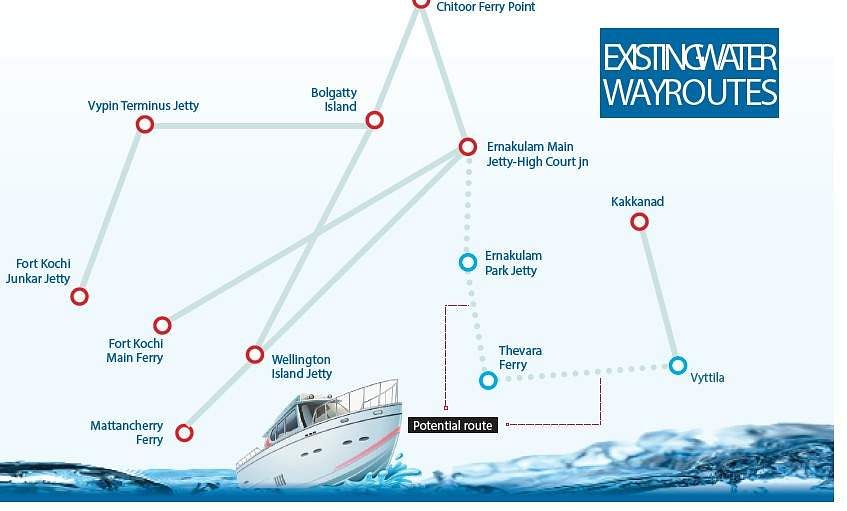 As many jetties are situated in the interior areas, the lack of interest from buses and auto rickshaws is a major problem. “Re-routing of buses and autos on the basis of dynamic planning is needed in the long-term. But in the meantime, we should look at alternative options like cycling. Though it may not be a hit in the city, people will enjoy using it in the interior areas,” says Sreedevi.

Re-routing of Existing Services
With the arrival of the Kochi Metro Rail network on the Aluva-Maharaja’s College stretch, many bus owners and auto drivers are feeling the heat. But they are apprehensive about rerouting from the outskirts of the city. “There are numerous buses running in the same route in a fraction of minutes. In addition, a majority of the passengers have started using the metro. But we don’t think the rerouting to interior areas fetches any revenue unless people actively use water transport,” says a bus owner.

He may be right. The boat service from the Vyttila hub to Kakkanad is yet to become popular. But the officials are still waiting for the implementation of the water metro for the rerouting of buses and auto rickshaws.
“We have received a request to introduce a new bus route linking Chittoor ferry and Kakkanad. The department will initiate large-scale re-routing plans in coordination with all stakeholders once the Water Metro becomes a reality,” said K Padmakumar IPS, Transport Commissioner.

UMTA will bring in a sea of change
The officials are also pinning their hopes on the formation of the Unified Metropolitan Transport Authority (UMTA).  This is a project which links the metro rail, water transport, bus, taxi, and auto rickshaws. Many experts are suggesting that the city’s transportation will witness a sea change once it becomes a reality.
“As UMTA will have members from different modes of transport, there will be more coordination between them. Systematic scheduling will eradicate routes that are running at a loss and offer better connectivity,” said Sreedevi.