Here is the ‘Heartbeat of Handloom’

So, she designed a motif where the weaves look like an ECG.

KOCHI: Social entrepreneur Lakshmi N Menon was at the handloom town of Chendamangalam, listening to the steady rattling of the loom when she felt a change in its sound. Lakshmi asked a woman weaver how the sound had changed. The weaver replied, "I changed the thread into a thinner one." Lakshmi soon realised that each thread creates a different sound. 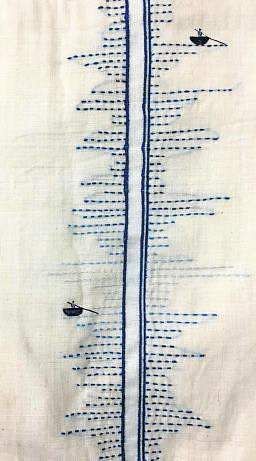 "Weaving the 'kara' for the mundu has a different beat as compared to other fabrics. It is very rhythmic. When I recorded it on my phone, I saw the pattern of the sound wave. It looked so beautiful. I thought I should use this," she added.

So, she designed a motif where the weaves look like an ECG. In one side, there is a small boat. "When you look at the loom, there is a shuttle that weaves the warp and weft of a fabric," says Lakshmi.

"This shuttle, which looks like a boat, is called an 'odam'. Odam means boat. That is the link. I wanted to show the union between the weavers and the fisherfolk. These two communities are getting together to weave a new social fabric for the new Kerala," she says.

So, on the World Handloom day,  Lakshmi created a new motif called 'Heartbeat of Handloom'."Among the crafts of India, handloom stands in a different league," says Lakshmi. "It may be the most complex, but the most poetic as well. The real concern, today, is to save the art form from extinction by evolving new forms and designs," she adds.