After a bad festival season last year, vendors were hoping to cash in on the Onam rush when the flood struck again

KOCHI: The shopkeepers at Broadway, one of the busiest markets in Kochi, saw a decline in their businesses during the last Onam season in the aftermath of the flood. Though a busy shopping area throughout the year, the business usually peaks during the season. These vendors were hoping to recover their losses in the upcoming festival season, but the ongoing rain and flood have cast a pall of gloom over it.

“Usually, the Onam rush at Broadway starts a few days before Chingam itself. Although Chingam is just five days away, the rush hasn’t begun yet. For some time now, rain have been a concern for vendors in Broadway. The sale recorded last year cannot be accounted as Onam sale,” says Rajeevan, a resident of Marine Drive. 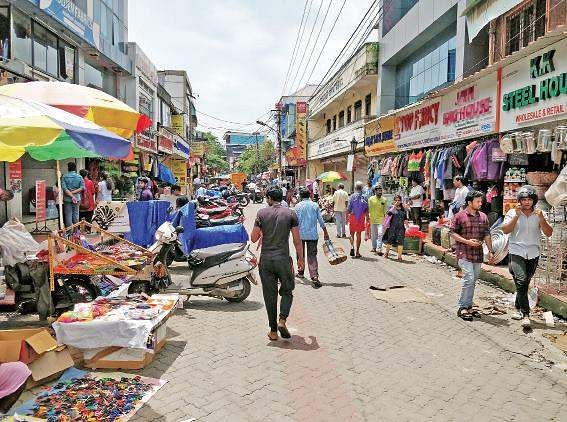 According to the vendors, the total sales have gone down by 50 per cent after the flood last year. Jewellery, textiles, fancy stores and flower shops are the ones which usually pick the best business during the festival season. The jewellery vendors are, however, apprehensive about the upcoming sale. “Since the flood last year, the market has been dull. The business was picking up after March. With the rain getting stronger, the business is dreary for the past four days.

One sovereign of gold now costs D27,480, whereas the price of one gram shot up to D3,435 from D2,800 in one month. This has greatly affected gold sales. If the rain continues, the market will lose its stability,” says the owner of a prominent jewellery shop in Broadway.Textile business, which drastically declined after the flood, hasn’t recovered yet. “Onam season is our biggest hope. Last year, the floods washed it away and the situation persists,” says Jayanandhan, proprietor of Bhadra Textiles, a retail and wholesale shop in the market. “The sale was good during the Ramadan time. But, the sales for Bakrid was really disappointing,” he says.

However, the ongoing rains have been a blessing in disguise for many in the textile industry. “Many people are coming to buy materials for the relief camp. That has made the textile industry live to an extent. We are now selling branded and non-branded items at a discount of 15 per cent throughout the year. Still, the number of people coming to the market is less,” adds Jayanandhan.

Flower shops in the market had record sales until 2017. However, last year was the dullest in the market’s history. “Flowers like white chrysanthemums are the most popular during Onam. The flowers are brought from places such as Ooty. With Tamil Nadu facing acute water shortage, we aren’t sure whether these flowers will hit the market during Chingam. Last year, marriage functions were cancelled due to floods. Weddings bring the best business and we hope the business won’t be down this year-round,” says Venu, who has been running a flower shop for around 49 years.

The municipal corporation had carried out an eviction drive against roadside vendors at Broadway two months ago. However, roadside vendors are still active in the market. "Our fingers are crossed. This is our livelihood. Last year, our business was badly hit. This year, we are expecting a better business,” says a roadside vendor.

The Onam Rush
Usually, during the festival seasons, sale of jewellery, textiles and flowers picks up.
However, the total sales went down by 50 per cent after last year's flood.
The business had been gradually improving since March. With the rain getting stronger, vendors, especially jewellery sellers, are apprehensive about the upcoming festival season.
While one gram of gold cost Rs 2,800 last month, the price has shot up to Rs 3,435 now.

Now we are on Telegram too. Follow us for updates
TAGS
Kochi Broadway Kerala floods Onam