‘Save Western Ghats now, or it’ll be too late’

The destruction caused by the flood and landslides in two consecutive years has triggered a debate on the need to implement the Gadgil Committee report on the conservation of Western Ghats ecology.

The destruction caused by the flood and landslides in two consecutive years has triggered a debate on the need to implement the Gadgil Committee report on the conservation of Western Ghats ecology. Though Three studies were conducted for the Western ghats conservation from 2010 to 2014, none of theM was implemented due to stiff resistance from various quarters. Express explores the circumstances that led to shelving of reports

KOCHI: The devastation unleashed by the torrential rains during the last two years, which set off a series of landslides and flood, inundating human habitations, overwhelmed villages, demolished houses, buried scores of people under rolling mud and landed lakhs in relief camps, has stirred a debate among geoscientists and environment activists in the state. According to them, the indiscriminate development spree has taken a toll on the environment, which has resulted in extreme weather events and deadly natural disasters. 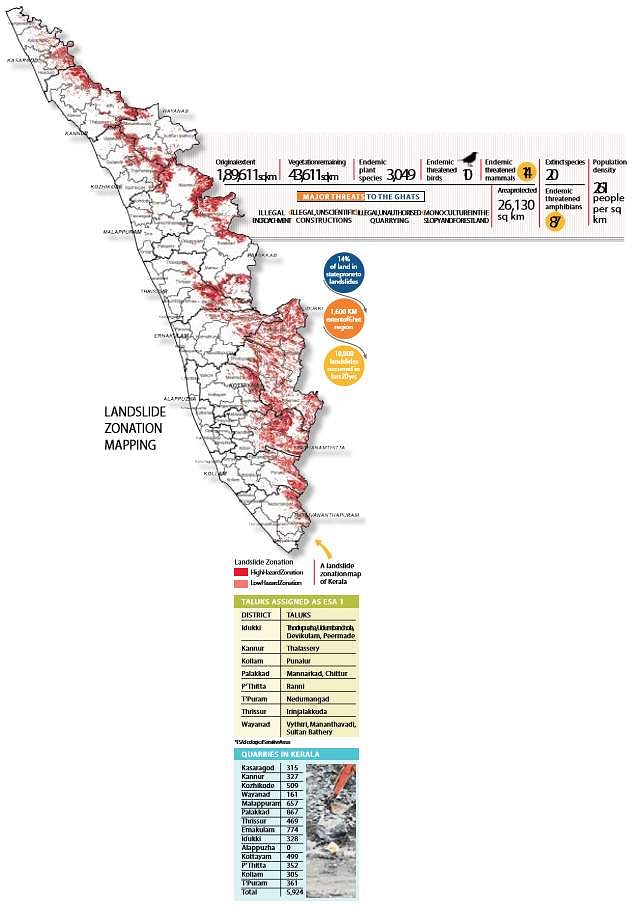 The Madhav Gadgil panel report had laid down a road map for the conservation of the ecologically sensitive hills. As a section of society opposed the report, the government shelved it and assigned the Kasturirangan committee to conduct a fresh study. With the residents of the high ranges rejecting the Kasturirangan panel report also, the Kerala government appointed Oommen V Oommen committee, whose recommendations were forwarded to the Centre. However, none of the reports were implemented, facilitating further degradation of the Ghats.

Puthumala and Kavalappara are warning signs. If we fail to act now, catastrophic disasters will wipe the state off the map, warn scientists.

“Such landslides are warning signs. The government should form Hill Area Development Authorities for the 10 taluks which are considered susceptible to landslides. Land use, including construction and unscientific agricultural practices, should be regulated. We should not allow anyone to conduct mining activities in steep slopes,” said National Centre for Earth Science Studies scientist K K Ramachandran.
According to him, the state should formulate a land-use policy and show the resolve to regulate violations. The government should shift its focus from disaster relief to landslide mitigation. Steps should be taken to create awareness and discourage people from constructing buildings in hazardous areas, said Ramachandran.

Rampant constructions in flood plains are causing floods. “All the first order and second-order streams that drain the flood water to rivulets have been blocked. Lack of proper drainage system is the reason for the flood,” he said.

According to biodiversity expert C M Joy, the state should take a correction course, initiating long-term and short-term steps to avoid devastating landslides and floods.
“If the hills are razed, hot air from Tamil Nadu will start blowing to hill stations like Munnar and change the state’s weather pattern,” he said.

“The government should ban the operations of granite quarries in the ecologically fragile areas immediately. No one should be allowed to raze down the hills and the height of the buildings in the high ranges should be restricted to 15 m. Long-term policies like afforestation should be implemented to restore the ecology of the Western Ghats. Around 5 cents of head forests, with endemic tree species, should be grown on top of hills. Bamboo and reed should be grown in the slopes. Weak dams in high-risk zones should be decommissioned in a phased manner,” said Joy.

If the hills are destroyed, it will change the state’s weather pattern. It is heartening to see Kerala realising the need to implement the Gadgil Committee report after eight years. Had we implemented the report earlier, we could have avoided the disastrous landslides at Kavalappara and Puthumala,” he said.  According to Vijayan, it was the land mafia, builders and quarry owners who spread misleading information about the Gadgil Committee report among the farmers inciting widespread protests, which forced the government to shelve the report.

The high-resolution zonation mapping of Idukki and Wayanad districts, undertaken by the National Centre for Earth Science Studies, will be completed within a month. The map will help identify landslide hotspots in the two districts and take precautionary measures, K K Ramachandran, who heads the project told Express. Around 14 per cent of the land mass in Kerala, located in 10 taluks, has been identified as landslide-prone areas and identifying hotspots will help mitigate landslide hazards. The map has classified the areas into five zones like low, low to moderate, moderate, high and very high based on susceptibility.

“Luckily we were able to source a high-resolution elevation model from abroad for the study. It will become handy to get a clear idea of the slopes in the area,” he said. However, the accuracy of the prediction has been affected due to lack of data to validate the findings. Though Kerala has witnessed around 10,000 landslides of different magnitude during the past two decades, no data is available with the government regarding the incidents.

Now we are on Telegram too. Follow us for updates
TAGS
Western Ghats Kerala floods