Have you heard of Pooradam Thirunal Sethu Lakshmi Bayi? She was the last queen of Travancore who ruled between 1924 and 1931.

KOCHI: Have you heard of Pooradam Thirunal Sethu Lakshmi Bayi? She was the last queen of Travancore who ruled between 1924 and 1931. As a queen, Sethu Lakshmi made many noteworthy contributions that have now become a forgotten relic of history. Prizing her story out of oblivion is Sudheer Ghosh, a history enthusiast from the city who has made an 18-minute-long music video tilted ‘Ormmayil Nammude Rajanakshatram’ on the queen’s life. 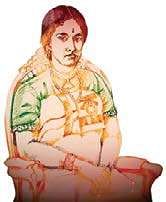 “Contributions made by the queen to Travancore include the construction of Aruvikkara dam and the extension of the Railway Station from Pettah till Thampanoor,” said Sudheer, who is the director of the music video.  The road leading to  Vaikom Mahadeva Temple was open to the public during her tenure. She has also contributed to the fields of modern medicine, education and revenue mobilisation. “The State does not have a single memorial of the queen who initiated several social reforms. Her life is unknown to many and I wanted to change that,” he added.

After meeting the queen on a visit to the erstwhile kingdom of Travancore, Gandhi wrote in Young India, “She (Rani) can be set as an example for all the rulers of India.” On the visit during Vaikom Satyagraha, the queen had requested the Mahatma to meet spiritual leader Narayana Guru.

Sudheer had earlier made a 28-minute documentary on the subject in 2016 along with his friends. The documentary employed animated sketches to portray events in the life of the Regent. It was made in both English and Malayalam. The English version has got over 68, 000 views.