From Punjab, with love

Started in 1969 as perhaps one among the first north Indian restaurants in Kochi, Punjab House is now famous for its humble and homely food

KOCHI: I accidentally ‘discovered’ Punjab House six years ago. Now, I’m positive that recognition would have dawned on almost every Kochiite’s parents’ face. Owned by a Punjabi family settled in the city years ago, the restaurant’s fame is solely contributed by word of mouth. I remember the decades-old building, nestled in a by-lane in Broadway. My tastebuds can fondly recollect the piping hot plate of aloo ka paratha with a slab of butter shimmying its way and the lassi which guarantees you a ticket to seventh heaven.

Wanting to relive the experience, I went back, to the place, and in time. The current owner, Brahamdev K Dhuper, has hospitality writ large on his face. “The restaurant was started in 1969 by my mother, Pushpa Krishanlal. Back then, we just had one north Indian restaurant in the city. My father was in the Armed Forces. He was commissioned into the Indian Air Force, after the Partition and was posted in Mumbai. Our relatives were in Kochi and we would stay with them often. 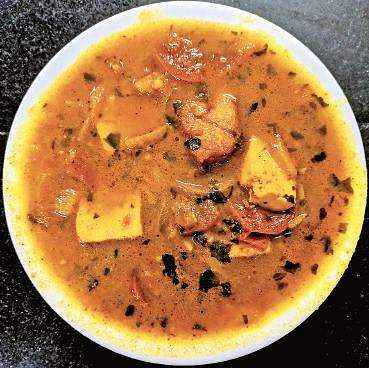 It was then, my mother noticed the lack of Punjabi restaurants. After my father’s retirement, we settled here and she started the restaurant. Now there are several north Indian restaurants but ours is a ‘humble’ place with reasonable rates,” says 64-year-old Brahamdev, a former engineer with Sony, who took over the place 14 years ago. “The restaurant has a good name and I wanted to make it better,” he continues. His mother is now 94 years old.

‘Punjab House’ is unlike your regular Punjabi restaurants. It serves no tandoori or non-vegetarian dishes; Just your simple, ‘humble’ homely vegetarian Punjabi food, according to Brahamdev. “Our most favoured dishes are the aloo ka paratha, gobi ka paratha and the lassi. Also, we make some ‘subjis’ (vegetable curries) such as the karela pyaz, which no restaurant in the city makes. Sev tomato, Shimla mirch aloo and papad sabji are among the rest,” he says.

Albeit, one can never find the same dish every day. “We have customers who dine at the restaurant twice a day. Just like how it is in our homes, where the menu changes so that children do not get fed up with the food, my mother had introduced this wherein the menu changes by the day,” he smiles. Now, that’s some variety I need in my life.

I’m served their famous aloo ka paratha with boondi raita and paneer curry, the day’s special. Accompanying my meal is none other than the lassi. “You won’t find a lassi like this,” says Brahamdev. And how right he is. I immediately sip the lassi. A plethora of memories rush in, along with the cold, sweet yet tangy flavour of the lassi. The answer to all my troubles.

The paratha, stuffed with potatoes tastes even better with the raita. And the curry reminded me of home. Wait, didn’t Brahamdev say that ‘homely’ food was their USP? “When we began, not many Malayalis were not accustomed to eating chappattis. Now, our Malayali customers have overtaken north Indians! Also, here you can see people across various states having food under one roof. That is my mother’s specialty.

She has curated the food in such a manner that everyone would develop a liking to it,” shares Brahamdev. The apple doesn’t fall far from the tree. His son, Aayush Brahamdev, runs the Urban Paratha brand, across three outlets in Kochi. “Urban Paratha serves non-vegetarian and tandoori dishes,” says the proud father. Brahamdev is also a HAM radio operator. Probably that explains how he connects various communities under one roof, this time, in the name of food.