International film festival of Kerala in all its glory

A regular at this year’s IFFK would have noticed the new segment added to film festival’s bulletin, an illustration.

KOCHI: A regular at this year’s IFFK would have noticed the new segment added to film festival’s bulletin, an illustration. It features a few theatres and venues of the event. Illustrator Devaprakash P shares his experience of freezing some of the moments from IFFK on his sketchbook.Devaprakash who is an alumnus of the College of Fine Arts, Thiruvananthapuram, has been attending IFFK for the past 10 years. But taking part in the fest as an artist is a different experience, says the illustrator. “The big queues at the festival have been illustrated by a lot of artists. But my illustrations include the theatres, offices and venues of importance,” he adds. 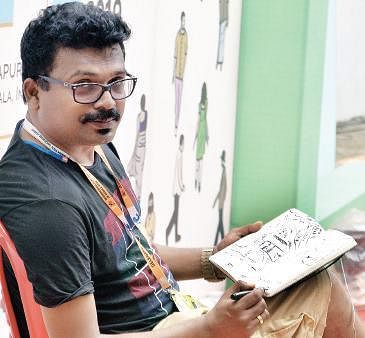 Devaprakash’s next set of illustrations of IFFK include the portrayal of delegates taking part. “Everyone visiting the IFFK is unique and I am trying to recreate their emotions and expressions. I think IFFK provides the best ambience for the artist who prefers the crowd to sketch,” says Devaprakash. “I want to give detailed illustrations. Every sketch is penned after thorough observation. I carry my sketchbook, pencil and pen brush whenever I travel,” he adds.

Devaprakash’s passion for art began at a very young age. Sharing his memory of the first sketch he drew, he says, “I was in Class III when I drew a picture. I drew an ox cart from imagination even though I had never seen one.” Later, Russian storybooks, rich with illustrations became his inspiration. The artist has also worked in the Malayalam film industry creating the storyboard for Odiyan and Bhramaram.

Devaprakash has organised solo and group exhibitions in various parts of the state and has bagged the best illustrator award conferred by Bala Sahitya Institute in 2009 and 2012. He is working on a launching a YouTube channel that portrays places he has travelled in the form of an illustration. “The film ‘Portrait of a Lady on Fire’ screened at IFFK, which depicts the life of an artist helped me to enhance my knowledge of art. A film is captured through a camera but for a painter, his eyes work as the camera,” he concludes.

Now we are on Telegram too. Follow us for updates
TAGS
IFFK