Joel marches to a different beat

KOCHI: Joel Joseph has always had a fine sense of rhythm. His parents Raju Varghese and Merlin Sheeja began noticing his knack when he would tap along to any music blaring in the background. Or when he would upturn kitchen utensils and use them to render a mini concert, much to their joy. 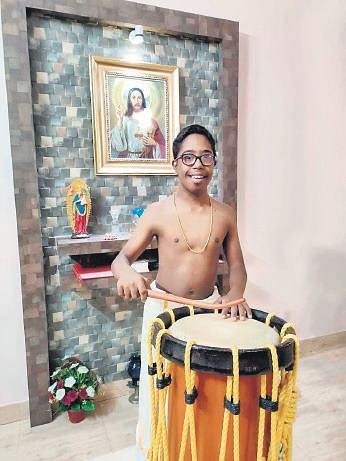 Sensing that their son was indeed special, they enrolled Joel with Shrikanth Puthenkurish, his guru who introduced him to the chenda. Three years later, 15-year-old Joel, who has been diagnosed with Down Syndrome, is all set to perform his debut chenda performance (arangettam) with 15 other artists at the Ambikapuram Church, Panampilly Nagar, at 8am on Saturday.

“He used to religiously listen to the performances of Padma Shri Mattanoor Sankarankutty Marar and Peruvanam Kuttan Marar. He met them in person and sought their blessings for his performance.

The knack to immediately catch a beat and replicate the same made us want to look out for the right kind of coaching. However, it wasn’t easy; he has to be given special attention and not taught in a group. Later, we found a guru who would come to our house every day and coach him for an hour,” says Sheeja, his mother.

Joel began his education with the Shraddha School for Children at Ernakulam and is currently a Class VII student at SRV UP School, Ernakulam. He had his way of learning the instrument. “He would keep counting the beats to be in sync with the rhythm instead of the conventional way of understanding swaras. It’s easy for him when numbers are involved,” continues Sheeja. Joel’s parents are extremely proud of the fact that he was never one to give up.

“There is a noticeable difference in his physical appearance and body language ever since he began learning the chenda. His shoulders have become stronger which has paved the way for his posture to become better. Simultaneously, his concentration has improved to a large extent,” says Raju, his father.
Raju encourages parents with children of Down Syndrome to spend as much time as possible with the kid.
“Discover their talents and work on them. It is never an impossible task. The best thing that you can probably do for them is to divert their attention to art forms,” he adds.