KOCHI: Last year, the sound decibels at Pallimukku and Kundanoor Junctions recorded 106 decibels, nearly double the permissible levels. And, if periodic studies conducted by the Pollution Control Board are any indicator, the High Court Junction, an unofficial 'silent zone' in the city, is witnessing a surge in noise pollution.

Alarmed by the impact this could have in the future, the Pollution Control Board will soon set up Continuous Sound Monitoring Analysers in various part of the city, to keep a frequent check on the rising levels of sound across Kochi. This is the first-of-its-kind initiative, according to M A Baiju, Environmental Engineer, Pollution Control Board, who asserts that continuous noise-level studies are quite a rarity in the city. 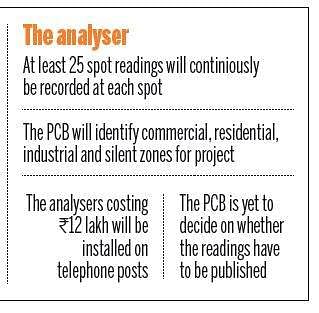 "Noise pollution is going unchecked everywhere in the city. Even silent zones, including the courts, premises near hospitals and educational institutions, are not silent anymore. Incessant honking and the use of loudspeakers are rampant. People need to stop and analyse how much noise is being produced on a daily basis. This is why we decided to install the Continuous Sound Monitoring Analysers in several places, which will record the noise levels," said Baiju.

Proposals were earlier mooted to set up one monitoring station at MG Road, near Medical Trust Hospital. "This was in the wake of reports the noise levels were extremely high near the hospital. A case was also filed in this regard, which was why the decision was taken. However, after deliberations, we realised that Kochi as a whole needed to be monitored, which is why decisions were taken to set up analysers in different locations," he said.

According to him, different areas in Kochi have specific permissible noise levels. "To make monitoring easier, we have to first identify the commercial, residential, industrial and silent zones. The analysers costing I12 lakh will be installed on telephone posts. We are yet to decide on whether the analysis of the noise levels should be exhibited among the public," Baiju said.

"The Traffic Police will also be roped in for the project because the concerned DySP Traffic is responsible for the vehicular sounds on the road. They will also be given an awareness," Baiju added.Meanwhile, IMA former president and state convenor of the National Initiative for Safe Sound Dr V D Pradeep said vehicular horns is the major cause of noise pollution in Kochi.

"However, despite frequent awareness classes, authorities are yet to take up noise pollution as a major city issue. However, it is a slow epidemic which needs to be addressed at the earliest, since the number of vehicles registering is also high," he said.

21 injured in Kerala after lorry collides with KSRTC bus