German development agency GiZ, which is carrying out the Climate Smart Cities programme in city, is expected to come up with the new mobile app in a month.

KOCHI: Here’s a piece of good news for town planners and civic authorities who have been devising measures to prevent the kind of severe waterlogging and flooding witnessed in Kochi city on October 21. German development agency GiZ, which is carrying out the Climate Smart Cities programme in Kochi, will soon come up with a mobile app that can help them in responding to waterlogging issues in no time.

Kochiites can download the app and update the pictures of areas that are prone to waterlogging. “A picture of the area which is affected or under threat of waterlogging or flooding should be uploaded on the app. The photo will be sent to the Operation, Control and Command Centre (OCC) of the Smart City Mission. The OCC will send the message to the respective authorities to identify the reason for the waterlogging and coordinate with the task force to visit the area and sort out the issue,” said Ramesh Nair, technical expert, GiZ.

He said the officials concerned should identify the reason for the flooding in the area. “The drains can overflow due to many reasons, including blockage caused by waste. The workers, after visiting the site, should resolve the issue before the flooding gets worse. A red light will keep blinking on the app till a particular grievance submitted by a user is resolved. This, in other words, is a warning to other users that the particular area where the red light is blinking is affected by waterlogging. The red blink will stop once the user uploads the photo of the area after the issue is resolved,” he said.

He said the app has already been launched in Bhubaneshwar, which is selected for the Climate Smart Cities project. “We will have an updated version of the app for Kochi which is expected to be ready by next month,” he said.

Commissioned by the German Federal Ministry of Environment, Nature Conservation and Nuclear Safety and executed by GiZ, the Climate Smart Cities programme attempts to anchor climate-friendly solutions in the cities selected under the 100 Smart Cities Mission project.

How does it work

A workshop as part of Climate Smart Cities project will be organised on Thursday and Friday at Hotel Taj Gateway. The workshop primarily aims at preparing a check list for inclusion in the detailed project report prepared by Cochin Smart Mission Ltd for the Ernakulam market renovation project.

The event will also look into developing a framework for implementing principles of green building in the commercial and institutional building sectors in Kochi. “The workshop intends to be a two-day exercise that will use a collaborative approach to create achievable solutions and approaches that would work for Kochi,” said Mayor Soumini Jain. 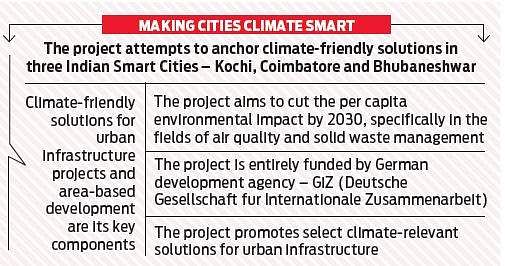