Bengaluru-based alternative act Black Letters is in the city tomorrow, kicking off a multi-city album tour of their latest LP ‘Still As You’

KOCHI:  Kochi-bred, Bengaluru-based alternative band Black Letters has plenty to be proud of. Since its inception eralier in the decade, and the release of debut album ‘Shapes on The Wall’, the four-member team has managed to create a sound that is delightfully its own. Through changing times and industry landscapes, they have kept their eyes and ears fixed on learning and evolving. Their 2015 EP ‘Petrichor’ came with visible transformation—elements of rock being replaced with that of dream pop.

‘Still As You’, their latest album, is an even steeper leap, where the band explores its experimental side while maintaining an effortless delivery of soulful, relatable emotions. Gearing up for a multi-city tour with the LP, Black Letters is performing in Kochi this Saturday alongside city-based acts The Deliricts and Awkward Nerd. 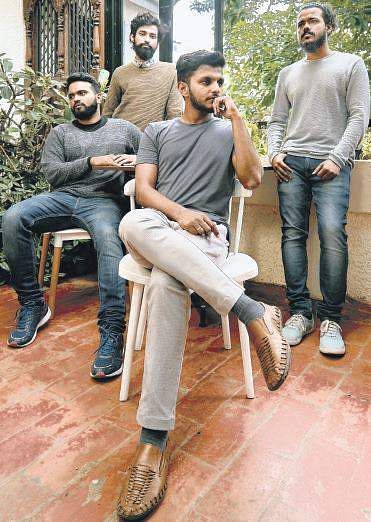 “Our music always had a sense of longing, not one that is desperate or sad, but one that is adventurous and hopeful,” says Sharath Narayan, vocalist, producer, and guitarist of the band. Come to think of it, ‘You Say’ from 2013, ‘Falter’ from 2017 and ‘In my senses’ from this year would all carry you into a comfortable mindspace tinted by subtle emotions.

While ‘Some Do Some Don’t’ and ‘Noon’ are beat-heavy tracks, ‘Not a Thing’, an under- two-minutes song, and ‘Dripping’ are ambient melodies. Sharath, who also manages a personal electronica project named Cosmic Attic, speaks about the use of recorded samples that is visible throughout the album. “I’m a huge lover of randomisation. I maintain a library of sounds I have recorded over the years. It’s applied to songs on a trial-and-error basis until we are convinced it sounds great,” he says.

The band released a music video for ‘In my senses’ recently, where the quartet appears as time travellers on a mission to unit Akbar and Anarkali from the1960 Indian epic drama Mughal-E-Azam. Guided by a gripping piece of melody, the video is directed by Mumbai-based artist Pranav Bhasin. For guitarist Sarang Menon, this album feels like ‘growing up’. “We have always wanted to sound different, and not be stagnant. We keep experimenting with songwriting, guitar and production, but this is not deliberate. There is no forced implementation of changes, we do what sounds good,” he says.

Almost a year back, Black Letters founded Overfeed Records, a Bengaluru-based label that manages multiple acts now. Under its banner, the band’s influence on Indian indie music landscape is only going to be stronger. “In between, we had gotten tired of playing the guitar, so we played around with the tones a little for ‘Still As You’. I think I will play more guitar for our future projects,” says Sarang.

This album being the last one that features Arjun Radhakrishnan on bass, the band has a lot to look forward to from the new joinee, Chennai-based songwriter and guitarist Jeevan Antony. “This album started off on a computer, and then we moved to the studio. With our upcoming projects, I would rather do it the old-school way,” says Sharath, adding that the band’s peculiar sound will always remain the same—distant, confused yet approachable.At Plug ‘N’ Play, Edappally`299, 6pm onwards