KOCHI:  Escaping a penalty is set to get harder for traffic rule violators. Soon, not a single such offence will go unnoticed as the Motor Vehicles Department (MVD) is planning to incorporate artificial intelligence (AI) technology to nab offenders. The first phase will see AI integration in speed detection cameras. Within a month, the MVD will add to its fleet 14 interceptor vehicles equipped with automatic number plate recognition (ANPR) technology. 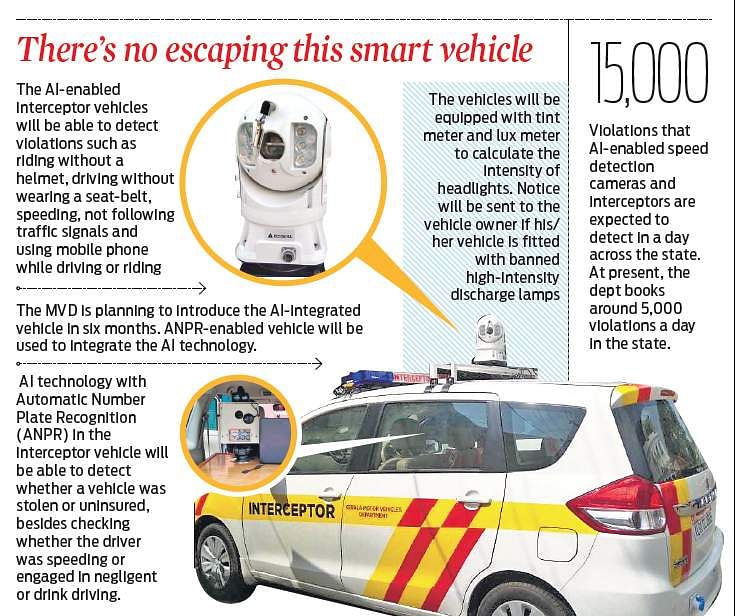 There’s more. The ANPR-enabled Interceptors will also be equipped with AI soon. The move, said Transport Commissioner R Sreelekha, aims at digitising enforcement.“Installation of AI technology in speed detection cameras is going on in full swing. Already, several cameras have been installed in Wadakkanchery, Kozhikode and Walayar areas. Around 100-speed detection cameras will be equipped with AI technology. AI and ANPR-enabled interceptor vehicles will also be launched,” Sreelekha told TNIE.

At present, MVD depends on manual enforcement to nab most violators. Under the new system, the AI-enabled cameras  will detect offences such as riding without helmets, driving without seat-belts, banned vehicles, vehicles whose insurance has lapsed, besides speeding and traffic signal violations.

“Keltron (Kerala State Electronics Development Corporation Ltd) has submitted the project details to integrate AI with the Interceptors that we will launch next month. We are awaiting the government’s nod for implementing the project. If all goes as planned, the project can be implemented in six months,” said Rajeev Puthalath, joint transport commissioner. He said the AI-upgrade will lead to a drop in traffic violations.

Android-based PoS devices
MVD is also set to launch Android-based point of sale (PoS) machines to pay the fine. “PoS machines will be handed over to all regional transport officers (RTOs) and sub-RTOs. Around 100 machines have been procured,” said Puthalath.  Besides facilitating collection of fines, the PoS machines will be equipped with a camera which will allow enforcement officials to take the picture of offenders and their vehicles.

Now we are on Telegram too. Follow us for updates
TAGS
artificial intelligence