KOCHI: With the filing of nomination papers for the byelection in Ernakulam assembly constituency over, major political parties swung into poll mode on Monday and launched a brisk campaigning without wasting time. LDF-backed Independent Manu Roy, UDF candidate TJ Vinodh of Congress and NDA nominee C G Rajagopal of BJP, who filed their nomination papers on Monday, found time to seek the blessings of important personalities and religious leaders before launching the campaign.

Manu Roy, who expressed confidence about his victory, said he was expecting autorickshaw, pot or football as the election symbol. Congress candidate T J Vinodh started his day by attending the Holy Mass at Palarivattom St John Baptist Church at 6.30am on Monday. Later, he sought the blessings of Karukappally Juma Masjid Khatheeb Ashraf Sakhafi and SNDP Yogam leader M N Soman. At 11am, he arrived at the City Rationing Office along with Hibi Eden MP, MLAs V D Satheesan, Anwar Sadath, Mayor Soumini Jain, former minister K Babu and filed the nomination papers. Later, he visited prominent personalities in the city. Former Maharashtra governor K Sankaranarayanan will inaugurate the UDF election committee office at Hospital Road in the city at 11am on Tuesday. 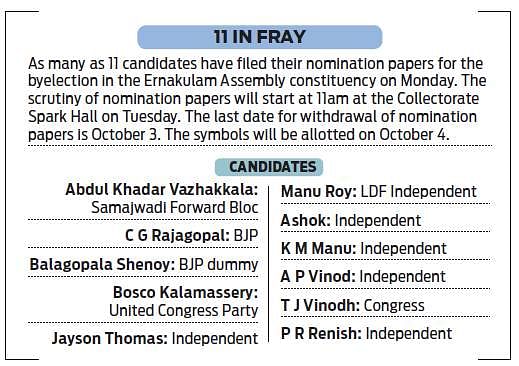 BJP candidate C G Rajagopal offered prayers at the TD temple in the city before filing his nomination papers on Monday. Leaders of the Gouda Saraswatha Brahmin Vikas Parishad donated the deposit amount for the candidate. He paid floral tributes at the statues of Mahatma Gandhi and Sree Narayana Guru before proceeding to file the nomination papers. BJP national executive member C K Padmanabhan accompanied him.

Stay up to date on all the latest Kochi news with The New Indian Express App. Download now
TAGS
LDF bypoll