The Udaipur-based professional mural artist and doodler Mamta Singh is on a tour of 15 cities to conduct her basic doodling workshop.

KOCHI: The Udaipur-based professional mural artist and doodler Mamta Singh is on a tour of 15 cities to conduct her basic doodling workshop. So far, she has already completed over 110 sessions in a year, including two abroad-one in the Philippines and the other in Bali, Indonesia. Her first workshop in Kochi is set to be held at Spacelance coworking on Civil Line Road on Thursday. But her road to becoming one of the most sought-after wall doodle artists in India was not easy. 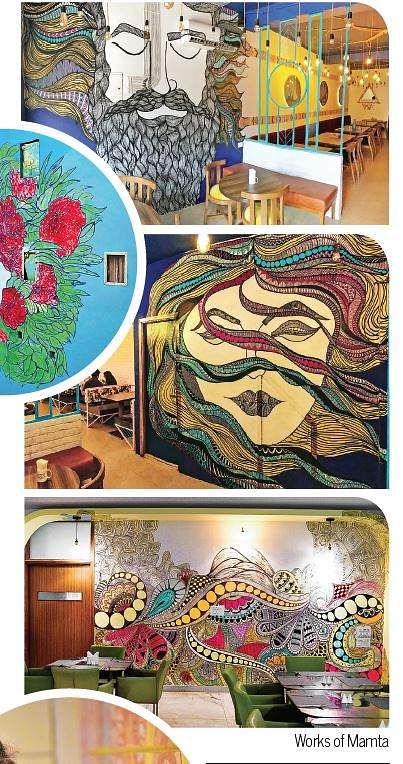 As a child, Mamta wasn’t allowed to paint at home. It was only after she moved to Jaipur for college that she took up art as a stress-busting activity. After graduating in 2012, she realised this was her calling but struggled for five years to make a living. “I was serious about pursuing art full-time but it was tough in the initial days. I would hardly earn L4,000-5,000 a month from commissioned projects. I supported myself by teaching at a college and took up other jobs. It’s only in the last three-and-a-half years that I have been getting regular projects and was able to sustain myself,” says Mamta.

Becoming a wall artist was something that happened completely by chance. Fascinated by mural art videos on YouTube she gave it a go at her Jaipur house which got her hooked. “After that, I went around asking for an opportunity to doodle on the wall of close to 52 cafes in Jaipur. Only one said ‘yes’. That’s how I did my first wall in 2014,” says Mamta. She has so far embellished over 300 commercial walls across the country for cafes, hostels, restaurants and exercise centres.

Her biggest project was a five-storeyed building in Ranthambore on which she painted an enchanting profile of a woman wearing a tiger’s head like a crown, her hair metamorphosised into a flowering creeper.
The workshop she will be conducting will teach participants how to make doodles by observing things around them. She is planning to launch her exclusive product line including coasters, calendars, posters and trays by mid-2020.