The guide to happy travel

For most of us, the hope that this pandemic will settle soon and we will be able to travel again keeps us going.

KOCHI: Vysakh Nair, founder and owner of Orange Jacket Adventures, has taken over 650 people on trips across a few of the best destinations in North-East India, the Himalayas and countries like
Kazakhstan and Nepal

For most of us, the hope that this pandemic will settle soon and we will be able to travel again keeps us going. Travel is medicine for the soul, and if anyone can testify to this, it is Vysakh Nair, founder and owner of Orange Jacket Adventures. The brand name is quite literal because Vysakh is the trekking guide in an orange jacket who has helped many open themselves up to the world. A graduate from the University of Petroleum and Energy Studies, it was five years back, while employed in an oil company, that Vysakh finally decided to follow his calling. He then took up a job in an outdoor company, and also procured outdoor and mountaineering certifications from National Outdoor Leadership School (NOLS) and Himalayan Mountaineering Institute (HMI). 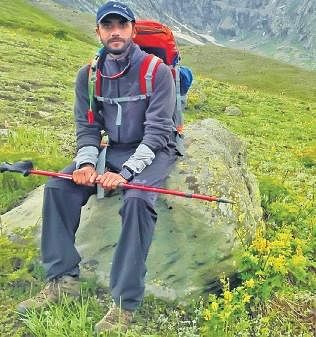 In 2017, however, he ventured into a trek start-up but then, it began falling apart. It was during this time that he put out a word on social media, calling travel enthusiasts for guided adventures. So far, he has taken over 650 people on trips across a few of the best destinations in North-East India, the Himalayas, and countries like Kazakhstan, and Nepal.

“I often get asked about my favourite place to go to. To be honest, it’s more about memories the place has offered me and my fellow travellers that stay with me rather than sceneries or monuments,” says the 20-something traveller. He remembers hanging out with eight trekkers at a small tea shop en route to Tawang, as the team got stuck in a roadblock. “There was nothing fancy there, but the best bonds are sometimes made over tea-time conversations. All members of that team have come back to travel with me separately or with new travellers nearly five times after that,” he says.

What sets the adventures of this orange jacket guide apart from other trips is how he makes travel an experience on many levels.“I remember taking all my trekkers into the jungle for an evening walk during a Chandrashila trip, and then asking them to find their way back to camp on their own, all while hiding in the bushes. Most of my trips are filled with such small moments. Even those who come with mixed feelings go back happier and feeling more connected,” he says. Like the rest of us, Vyshakh is also waiting for the pandemic to recede, so the world can go back to living their best moments.

Nagaland
Landlocked between Assam, Arunachal Pradesh, Manipur and bordering Myanmar to the east, there is so much the public doesn’t know about Nagaland. The ideal time for a trip is between 1-10th of December, especially for the Hornbill festival celebrated every year to encourage inter-tribal interaction and to preserve the cultural heritage of Nagaland. Rice beer is a must try and you will find yourself saying cheers to random travellers more than once. The coldest town in Nagaland, Pfutsero, has a beautiful patch of pink cherry blossoms and a two-day trek to the Dzouku Valley will make up for a great experience.

Meghalaya
Hands down the most adventurous trips. The groups go through a 6km dark cave with lights, ropes, gumboots and coveralls. Though the trip has one of the most scenic hikes in the country like the one to Nongriat double roots bridge, the highlight is the bamboo hike through the rock cliffs called Mawrykhkhang.

Kazakhstan
Most of us are biased to think that all countries ending with ‘Stan’ should be dangerous. But in Kazakhstan, over just nine days, you can travel to Charyn Canyons, four beautiful high altitude lakes,  one-day hike to a lake, half a day hike to a glacier, and take a gondola to ski in Shymbulak. You will also have a chance to learn Cyrillic language basic: Kazak and Russian.