Anyone broadly familiar with hip-hop is sure to be acquainted with Kerala’s rap icons, Street Academics.

KOCHI: Anyone broadly familiar with hip-hop is sure to be acquainted with Kerala’s rap icons, Street Academics. The six-member crew comprising Dr Haris Saleem (Maapla), Amjad Nadeem (Azuran), Abhimanyu Raman (Earthgrime), Vivek Radhakrishnan (V3K) and Arjun (Imbachi) created quite a stir last year with the release of their first full album ‘Loop’. Back with a video rendition of the popular track ‘Pambaram’ which released Saturday on YouTube, the group has broken the internet again with the upload garnering a million views in 48 hours. 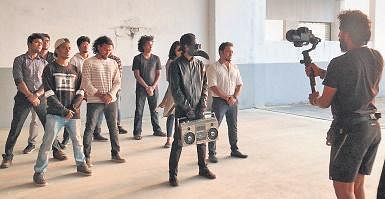 “The song has elements of old-school East Coast boom bap music along with West Coast funk. The composition seems very upbeat and happy but the lyrics talk about the chaos of the mind while we try to navigate the world. As soon as the album was released, the track became an instant hit. It was played in all the cyphers and parties. So it was decided early on to come out with a video,” says Akhil Joshy aka Lucid, the director of the music video and a hip-hop artist himself. The group was approached by comedy channel Karikku Media offering to fund the production.

The video follows a mysterious man in a crow mask carrying a boombox playing Pambaram. As he travels through the city, the music hypnotises bystanders to break into a dance. Akhil developed the concept of the crow man exclusively for the video. “The original track does not have reference to any crow but I was inspired by a 2016 track of Street Academics called Chatha Kaakka (dead crow). It talks about how crows embodying a third-world existence. They are outcasts but are part of many rituals and are among the most intelligent birds on the planet,” he says. The mask has been modelled after the safety masks worn by doctors treating the Bubonic plague in Europe during the 17th century.

Perhaps in a first-of-its-kind attempt, the video not only features members of Street Academics but many of the prominent faces from the hip-hop community in Kerala as well. “I wanted to bring together hip-hop artists from various bands and also the ones based in Thiruvananthapuram. Everyone has their own dancing style and stories to tell. Skateboarders and parkour artists from Kochi also make an appearance. I wanted people from all underground sub-cultures to be represented,” adds Akhil for whom ‘Pambaram’ is his second directorial venture.

The pre-production for the video began in December with Akhil pitching the script to Karikku. “They loved the idea right away. We planned to begin shooting in January but I was particular about working with cinematographer Inendu Krishnan and editor Arjun Menon.” The shooting commenced in the last week of February. Despite having shot at multiple locations and involving a large cast, the team was able to warp up in just two days. While crucial scenes are set in Fort Kochi, the video has also been shot at Vallarpadam and the mainland.