An out of work state

While July, August and September recorded 13.9 percent unemployment among all productive age groups, 12.5 percent was reported between October and December.

While July, August and September recorded 13.9 percent unemployment among all productive age groups, 12.5 percent was reported between October and December. Both numbers are quite high compared to the national average of 8.4 and 7.9 for the terms respectively. 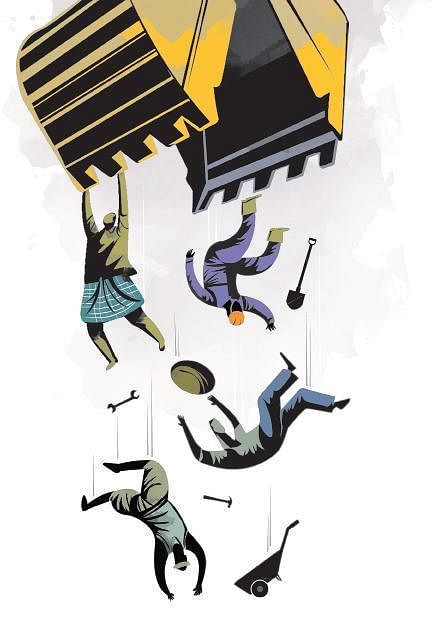 Given the fact that these figures were calculated during a seemingly non-volatile period in the state’s economy, experts warn that the unemployment rate is likely to spike further this year owing to the pandemic and lockdown.

“Kerala depends largely on the service sector economy like tourism. In the current scenario, the revival of the industry is vital as it will have a positive domino effect on ancillary industries like hospitality and transport. However, it seems like people are not ready to spend and it might take some time for the economy to bounce back,” said Dr D Dhanuraj, chairman, Centre for Public Policy Research.

Jose Sebastian, retired professor at Gulati Institute of Finance and Taxation, observed that Kerala is grappling with the issue of educated unemployment. It is a vicious cycle wherein lack of suitable opportunities prompts people to opt for higher studies, which in turn makes them overqualified for most jobs. “The youth here spends a significant portion of their productive life getting educated in the hope of landing either a high paying or a government job,” says Jose.

He ascribes the unemployment problem in Kerala with the societal attitude towards white collar jobs and dignity of labour. “If we had created a value system in which any kind of work is recognised and sanctioned, this problem would not have persisted. One of the pitfalls of the Kerala model of development is the false notion that the government is there to provide everything,” he says.

Need for liberalisation
A substantial section of the NRK population which returned to the state after Covid-19 is expected to remain out of work throughout the better part of 2021 will further escalate unemployment scores. Dr Dhanuraj points out that the diffidence of the government to liberalise the economy has proved to be a major policy barrier.

“This was, in fact, a great opportunity for the administration to open up some of the loss-making PSUs. At least on an experimental basis, it could have disinvested in KSRTC and KSEB even while retaining managerial power. Another example is the e-auto manufacturing venture under Kerala Automobiles Limited which I am convinced is not a sustainable business model.

I don’t understand why the government should get to the production of e-autos when many private players are willing to put in the capital. It’s high time that we move away from the paternal attitude of the state and ease regulatory barriers,” he says.

Checking the brain drain
Alerting to an impending demographic problem resulting from abled youth migrating to other countries leaving behind an ageing population, professor Jose calls for an immediate need to bring in a change. “The high rate of unemployment is created and man-made.

Though Keralites who have gone to Gulf engage in all kinds of menial jobs in subhuman conditions there, they won’t do the same work within the state owing to stigma. The returning NRK population is unlikely to substitute migrant labourers, so the unemployment rate will increase. This section will attempt to go back or may migrate to other parts of India Delhi or Mumbai,” says Jose.

For decades, Kerala has topped the literacy table.
The state’s initiatives in ensuring basic education for all has become a role model to the rest of the country. However, a recent government survey seems to have put the state on the top of the pyramid for a wrong reason — the highest unemployment rate