This will increase the output to 1.57 crore units/year and maintain 60 per cent energy neutrality.

KOCHI: To attain its goal of self-sufficiency in electricity, the Kochi Metro Rail Ltd (KMRL) will increase the capacity of its solar power production by commissioning an additional 5.4MWP capacity system on its buildings and tracks this year. This will increase the output to 1.57 crore units/year and maintain 60 per cent energy neutrality.

The KMRL authorities said the agency is well on its way to utilise solar energy to meet a major chunk of its power consumption. In line with its objective to achieve energy neutrality, the agency had already successfully commissioned three large-scale solar power generation systems in the past two years.The KMRL has already completed the installation of solar panels at Thykoodam metro station. Work is progressing at Vyttila, Petta, South, Kadavanthra and Elamkulam. 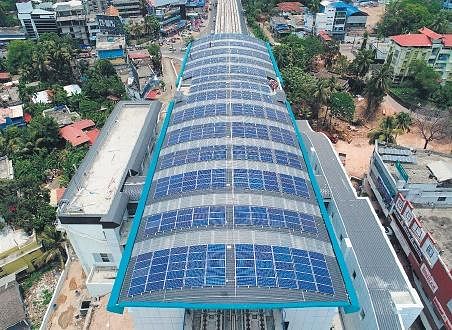 There are also plans to install solar panels at JLN metro station’s rooftop and track and ramp area at Muttom depot. The installation of rooftop solar panels will be completed by the middle of November 2020 and the rest of the work by December 2020. This initiative has brought down carbon emissions by 13,302 tonnes a year, which is equal to planting 5,33,033 trees.

The first phase of the project, which is 2.670MWP in capacity and capable of generating 36.5 lakhs units/year, was implemented through RESCO (Renewable Energy Service Company) in 2018. This contributed to 60 per cent of the total energy consumed then. However, the neutrality was reduced by half to 30 per cent with the opening of new stations in the Maharaja’s-Thykoodam stretch as the power consumption also increased.

“We are pushing for maximising the solar energy generation. We have a Solar Energy Policy in place. We are installing solar plants in all our areas, as far as possible, to gain green and clean power. The same will be replicated in the Water Metro project also,” said KMRL managing director Alkesh Kumar Sharma.
According to KMRL officer, the project is not just economically beneficial but it also sends a powerful message, emphasising the necessity to attain power self-sufficiency. The agency also believes every household will adopt solar power.

work progressing
Work is progressing at Vyttila, Petta, South, Kadavanthra and Elamkulam.
There are also plans to install solar panels at JLN Metro Station’s rooftop and track besides the ramp area at Muttom Depot.

Now we are on Telegram too. Follow us for updates
TAGS
solar power Kochi Metro KMRL