With the Thykoodam-Petta stretch commissioning, Phase I of the state’s dream project draws to a close

KOCHI: With the commissioning of the Thykkoodam-Petta-stretch on Monday, the first phase of Kochi Metro will successfully come to a close. One among the most capital intensive projects implemented in the state, the history of Kochi Metro began more than two decades ago.

It was in July 1999 that then Chief Minister E K Nayanar announced the government would entrust RITES Ltd, an engineering consultancy company, to conduct a feasibility study on the Kochi Metro project. The report was completed in August 2000.

However, in February 2003, the A K Antony government proposed scrapping the metro project and introducing the Skybus in Kochi. But the Oommen Chandy government, in 2005, revived the metro project, following which the Delhi Metro Rail Corporation (DMRC) made a presentation before the state cabinet and a `2,239-crore project was proposed again.

DMRC opened its office in Kochi in March 2009. In 2010, the V S Achuthanandan-led government made a budgetary allocation of `158.6 crore for launching the preparatory works of Kochi Metro. In August 2011, Kochi Metro Rail Ltd (KMRL) was formed. The Union cabinet approved the `5,126-crore Kochi Metro project in July 2012 and construction began on June 7, 2013.

On June 17, 2017, the service from Aluva to Palarivattom got commissioned and in the same year, the service was extended to Maharaja’s College, stretching a total of 18km. In September 2019, the service was further extended to Thykkoodam, which saw the ridership shooting up to 68,000 passengers per day on weekends. Though the last 1.2km was completed early this year, service had to be halted due to the pandemic.

Metro will resume service on Monday and will cover 22 stations, stretching 25km. Chief Minister Pinarayi Vijayan, Chief Secretary Viswas Mehta, KMRL managing director Alkesh Kumar Sharma and Union Minister Hardip Singh Puri will flag off the extension of the service till Petta via vidoeconferencing. They will also unveil the plaques announcing the commencement of the work to extend service from SN Junction to Tripunithura.

Following the practice of assigning a theme that reflects the state’s culture to each station, KMRL has opted ‘fishing’ as the theme of Petta station. KMRL expects to wrap up the stretch from Petta to Tripunithura by March 2022. 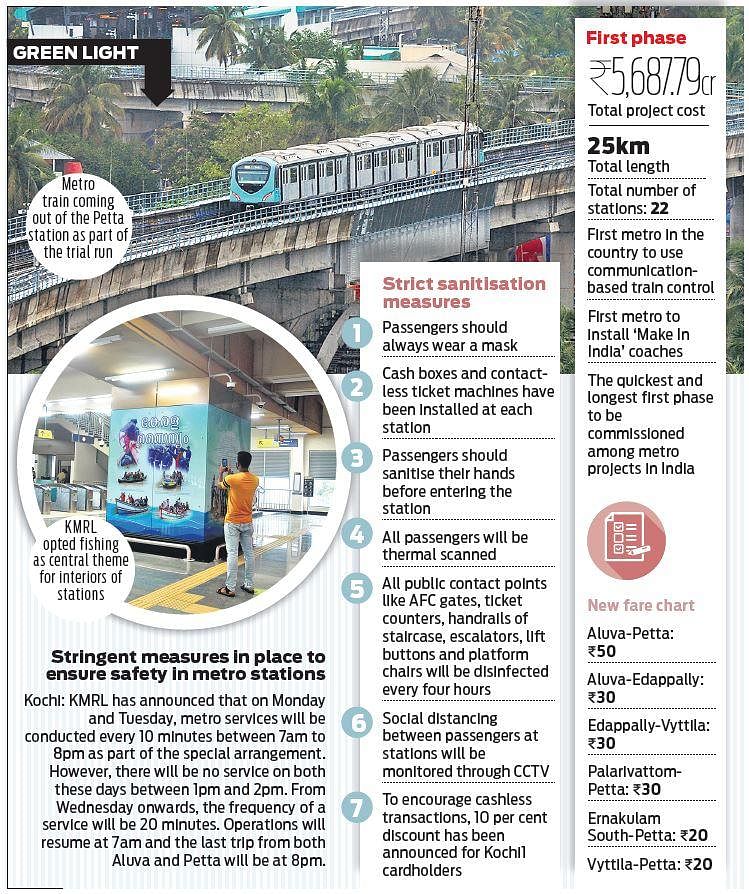 Now we are on Telegram too. Follow us for updates
TAGS
Kochi Metro Kerala