Why do people leave accident victims on road to die?

While insensitive people get busy clicking photos, harassment of Good Samaritans through legal process despite laws to protect them root cause, say experts

KOCHI: The death of a youth in Vypeen following a delay in shifting him to the hospital after he met with an accident on Tuesday calls for sensitising the public about the importance of timely rescue operation. Though there are laws in place to protect Good Samaritans, the public hesitates to get involved fearing legal hurdles they could face in the future.

Following a directive from the Supreme Court, the Union Ministry of Road Transport and Highways brought out guidelines for the protection of Good Samaritans in May 2015 to ensure that road accident victims are rescued and given medical attention in the shortest possible time. The Supreme Court directive came in a public interest litigation filed in 2012.

As per the ministry’s website, over 13 lakh people died on roads in India in the last ten years. In 50 per cent of such cases, death was preventable had the victims received medical attention in the golden hour, which is within one hour after the accident.

Upendra Narayan, an expert in road safety, said the delay in attending to an accident victim is only due to fear and lack of awareness among the people and even the law enforcers. “Despite having laws to protect people rescuing an accident victim, they still have to get involved in legal procedures. The person who is kind enough to rescue an accident victim will be forced to be a witness by the police and have to sit before courts for hours. I know several instances where the Good Samaritans were made accused in accident cases. The enforcement agencies should be first made aware of the laws. Later, awareness should be created among the public for which road safety should be made a part of the curriculum in schools,” he said.

The state had witnessed several instances of the persons who had shifted accident victims to the hospitals being made accused in cases. One such case reported in Kottayam came to limelight after the High Court ordered a Crime Branch investigation. The incident occurred on October 18, 2017 when 77-year-old Baby Valamparambil was killed in a road accident at Chingavanam. Deepthi Mathew of Monipally, Kottayam, who took the victim to the hospital, was framed in the case.

Later, Deepthi challenged the police chargesheet at the High Court. The court, in its order, stated that other than the bloodstains found in the car, there were no other marks in Deepthi’s vehicle. Not recording the statements of co-passengers in the car was a failure of the police.

Thomas J Anakkallunkal, counsel for Deepthi, said the Crime Branch recently filed a report supporting the local police’s chargesheet.“When the enforcement agencies take such a stand, how can people come forward to help  accident victims? We will be challenging the Crime Branch’s findings at the High Court soon. There are laws in place to protect Good Samaritans, but even enforcement agencies are not aware of them,” he said. 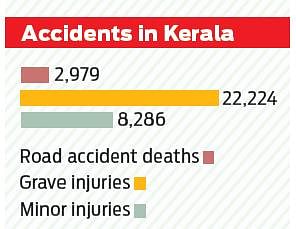 In February 2020, a 21-year-old woman resident of Vembayam riding a scooter was hit by a KSRTC bus at Aristo junction near Thampanoor police station in Thiruvananthapuram. She was shifted to the hospital only after 30 minutes and had to undergo six surgeries later.

“The government has been collecting road safety cess for the past several years. Besides, it also collects road tax from vehicle owners. Over `4,000 crore was collected in road tax last year alone. Do they use a portion of this for road safety?” Narayan asked.An ambulance driver working at a government hospital in Ernakulam said having mobile phones with cameras contributes to the insensitive mentality of the public. “Several people gather at the accident spot, but a majority of them will be busy taking pictures and videos of the accident victim and the vehicle involved. Only a few come forward to take the victim to the hospital,” he said.

NORMS FOR PROTECTION OF GOOD SAMARITANS

Now we are on Telegram too. Follow us for updates
TAGS
road accident death