Even as Thrissur district recorded 73.69 per cent polling, Guruvayur recorded just 68.4 per cent, the lowest among the 13 constituencies.

THIRUVANANTHAPURAM: Though BJP had urged its workers to vote as per their conscience in Guruvayur and Thalassery constituencies where the nomination papers of the party candidates were rejected, poll data shows that they stayed away from booths, especially in Guruvayur. In 2016, BJP candidates had secured 25,490 votes in Guruvayur, around 17.26 per cent of the polled votes, and 16.78 per cent of votes in Thalassery. 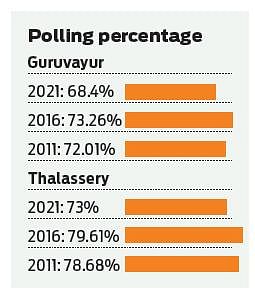 Even as Thrissur district recorded 73.69 per cent polling, Guruvayur recorded just 68.4 per cent, the lowest among the 13 constituencies. Guruvayur grabbed attention after Chief Minister Pinarayi Vijayan alleged that the rejection of BJP candidate Nivedita Subramanian’s nomination was not accidental. The drop in polling in Guruvayur indicates that hardcore BJP voters did not exercise their franchise.

“It may be true that a section of BJP votes did not get polled, but a good number of people who used to vote either for BJP or UDF might have voted for Khader this time,” he said. In Thalassery as well, polling was the lowest in 2021 than the previous elections.

Now we are on Telegram too. Follow us for updates
TAGS
BJP Kerala Elections