The world is one family

Devi Seetharam was grappling with finding a subject matter that inspired her after moving from Australia from AbuDhabi.

KOCHI: ‘Lokame Tharavadu’, the recently-inaugurated art exhibition under the fold of Kochi Biennale Foundation and curated by its founder and artist Bose Krishnamachari, is helping many such artists tread over the wave of uncertainty brought in by the pandemic.  Around 270 Malayali contemporary artists are part of the behemoth event. Some of them are based in Kerala, some in other states and many outside the country. The 70-day exhibition plans to display around 5,000 art installations. These will be spread out at six venues across Alappuzha and Ernakulam. Due to the surge in Covid cases, the exhibition is being held adhering to safety protocol. Only 75 people are allowed at a time at each venue. TNIE’s Krishna P S and Arya U R speak to artists on what inspired their installations 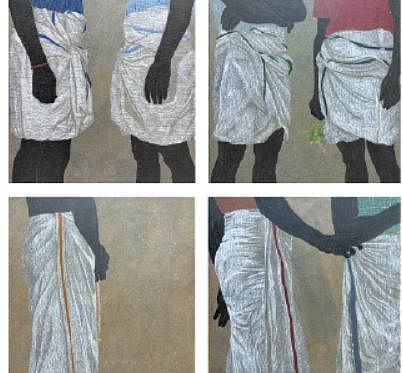 Devi Seetharam was grappling with finding a subject matter that inspired her after moving from Australia from AbuDhabi. She grew up living in China, Cambodia, South Africa, India, Switzerland, Thailand, Taiwan, Singapore and the UAE — basically all over the world. But to get out of her unfamiliar surroundings, she decided to turn to her roots and explore her own culture in detail. “I was struggling to connect with the city and space I was in. That’s when I looked into my culture, my relationship with it. That’s how my series was born.”

She was invited to Lokame Tharavadu by Bise Krishnamachari last year sometime in October. By December, she reached India and finished her works by January. “Incredibly, Bose and his team were able to pull off such a huge exhibition at this time,” she says.

Devi’s series, ‘Brothers, fathers, and uncles’, painted using acrylic on canvas, has a group of men wrapped in white ‘mundu’ standing around, occupying a space, and virtually doing nothing. They might be conversing, standing around forgotten flowers fallen on the road, or heps of hollow tender coconuts thrown away by travellers. What is spontaneously visible is the lack of feminine presence in the frames.

“These men are just occupying or dominating or feeling entitled to that space. The word entitlement feels most adequate,” describes Devi. The series is a statement on the public spaces — on how women are never perceived to be a part of them or are kept away most of the time. The elements of the space keep changing to depict the passage of time, she adds. It is not the greenery and landscapes of Kerala that found a place in her creative flow, instead, it was the glaring patriarchy — withered, yet standing strong.

For artist Thaj Backer, the lockdown had a hard time being creative. ‘Lokame Tharavadu’ was a cure to that, forcing him out of a creative block. It was during the lockdown that the Ponnanni-based artist discovered Arabic ink. He knew about its use in the ceremonial initiation of a child in Madrassas, where believers of Islam go for religious learning. But this was his first encounter with the medium as an adult. “Art is like that, it makes us walk back to our past. It is a way of viewing your surroundings, your past through inner eyes, “ says Thaj. The ink is made using shells of many nuts, rice, and a kind of tree gum. The discovery of this natural ink inspired him to experiment with it.

Thaj is displaying 27 works as part of his series — all made with ink on paper. The series named ‘When the other is a healing herb” will be displayed in five segments throughout the exhibition. His works are a memoir to nostalgia — fishing boats, lighthouses, markets, townscapes and the unequal lives of men and women, the burden they carry.  “Lokame Tharavadu has provided a place for relaxation during this trying period.  Even India Art Fest etc are only held for around three days. This 70-day exhibition is a great space for artists,” Thaj adds.

For Thaj, Lokame Tharavadu was another teaching moment. He assisted curator Bose in setting up the venues and displaying the art pieces. Thaj is still busy setting up sculptures and art pieces of other artists at the exhibition site in Alappuzha.

An ode to her roots 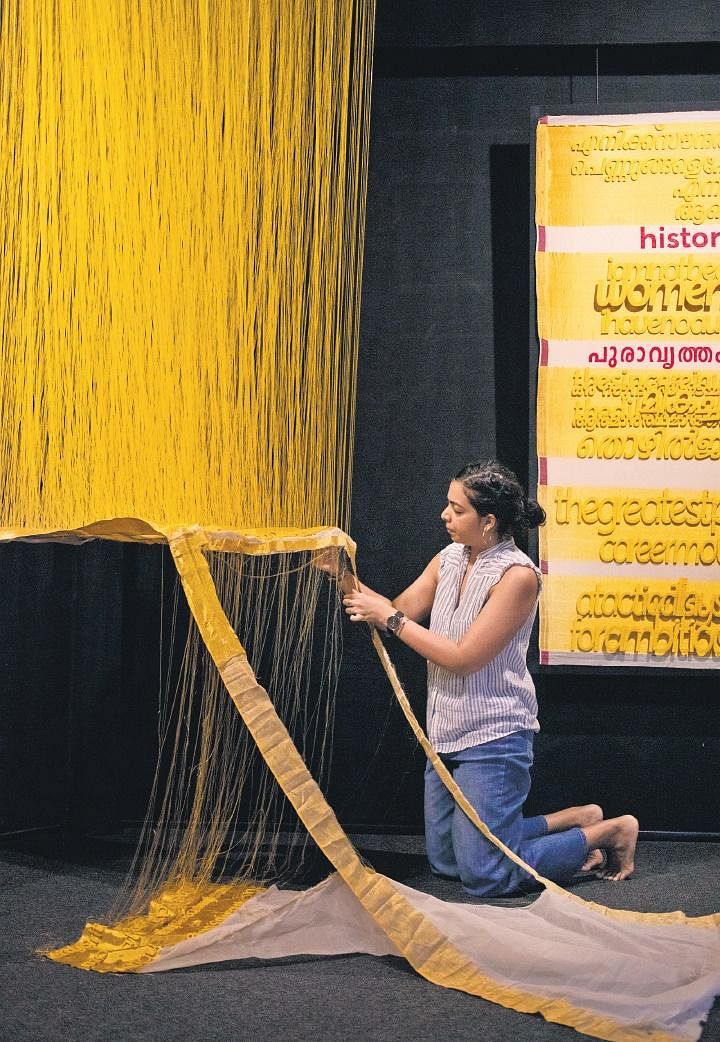 The smell of starched handloom mundu and veshti in solid white lined by golden borders that her grandmother used to rakishly wear is one of the first memories of ‘home’ for artist Lakshmi Madhavan. Her art installation at ‘Lokame Tharavadu’ titled ‘Hanging By Thread’ probably manifested from this distant nostalgia. It is on display at Port Museum, Aalappuzha.

For Lakshmi, the exhibition is a means to trace her roots back in Kerala. Moreover, it is an ode to her grandmother, who moulded the Malayali in Lakshmi who settled in Mumbai. “The curators explained to me the theme of Lokame Tharavadu, and for me, it resonated around the concept of home. Last year when the pandemic broke out, we all found shelter inside our homes.We all trusted it to protect and safeguard us. Home may be different things for different people. But for me, it is my grandmother who lives in Vadakara and the conversations I had with her growing up”.

Six 10 feet-long custom woven panels of kasavu mundu, artistically hung on the walls make the illustrious ‘Hanging by a thread;’. The panels are adorned with golden letters woven in Malayalam and English. “The panels were custom-made at Balaramapuram village, known for its handloom culture. I have used acrylic sheets to make a stencil to fix around 10,000 letters on the panel. Being brought up in Mumbai, I used to converse in English, but my grandmother was strict that I speak Malayalam withher. So these letters denote the linguistic hierarchies we shared denoting our identities,” says Lakshmi.

However, among the panels lies the core element in her installation, an ancestral handloom sari that was passed to her by her grandmother. “At some point in our lives, we all have to return to our roots,” the artist shares.