The economic slowdown brought about by the pandemic put brakes on domestic and international travels, affecting the aviation sector around the globe.

KOCHI: After the Covid-induced slowdown, Kochi airport is slowly regaining normalcy. Cochin International Airport Limited (CIAL) recently handed over J33.49 crore as dividend to the state government and managed to restart 70% of its in-house services. The airport aims to further diversify their returns in the coming months

The economic slowdown brought about by the pandemic put brakes on domestic and international travels, affecting the aviation sector around the globe. While some fell into abysmal loss, a few limped back to normalcy soon. Cochin International Airport Limited (CIAL), Kerala’s premier airport operator was quick on its feet, emerging from the dip gracefully. Returning to 70 per cent of pre-lockdown aircraft service capacity in domestic services, the agency is well on its way to achieving full capacity in a few months. “We were handling around 30,000 passengers daily in January 2020.

We had a total of 242 aircrafts operating everyday out of international and domestic terminals. Currently, the international operations are limited to the Vande Bharat mission. We also have ‘air bubble’ service which offers a direct route to international cities omitting layovers flights. Around 20 international flights arrive at the airport now,” said a CIAL spokesperson. 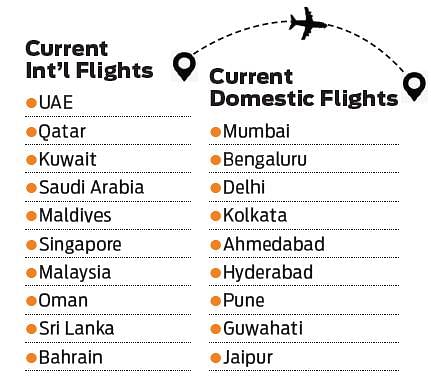 The airport was handling 15,000 domestic passengers daily before Covid. “We have managed to bring it back to 12,000, on 30 domestic flights touching down at the airport daily now,” said the official. According to the officials, cancellation of a few popular services in the wake of Covid has dented their plans. “We have started the London service back in August 2020. Though it started as a bi-weekly service, it was a hit. Air India increased the number of flights to three later. However, the new variant of Covid has put an end to this service,” the official said.

Earlier, the Union Ministry of Airways had permitted only 20 per cent travelers while restarting the services. It was later increased to 50, 70 and 80 per cent. The relaxations have increased passenger volume substantially. Nevertheless, amid the pandemic-related issues, CIAL managed to complete several infrastructure projects.

“The `162 crore project for resurfacing of runways and refurbishing runway lighting system was completed before lockdown. We are yet to utilise them fully due to the Covid-induced dilemma,” he added. Cial has a huge investor base with 19,000 shareholders from 30 countries. The government has 32.42 per cent share in the undertaking and its PSUs hold a 2.27 per cent. The company registered a turnover of Rs 655.05 crores in 2019-20 with a profit of `204.05 crore. 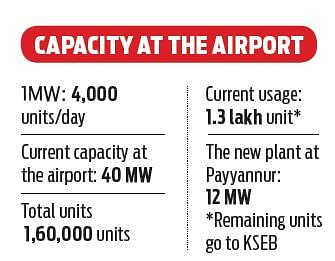 International Solar Alliance (ISA)
Cial MD V J Kurian participated in the ISA digital solar meet as Chief Guest recently. 120 countries participated in the summit and the managing director delivered the key-note address. He has assured Cial’s technical assistance in setting up solar plants in member nations. ISA is planning the CIAL-Model ‘Solarisation of airports’ across its member countries soon.

The agency has recently launched a floating solar power plant which can produce 452 KW. The plant which laid over two artificial lakes located on the 130-acre CIAL golf course will help the agency to produce around 1.6 lakh units of power a day, against its daily consumption of nearly 1.3 lakh units. It is also connected to the KSEB power grid.

Along with solar power plants on the airport premises, Cial is gradually getting into power generation in other parts of the state. “Along with the newly-launched floating solar plant, we are establishing a 12 MW plant at Payyanur in Kannur. The work has already started and we are planning to commission the project within three months. Within the next few months, our total installed capacity will become 52 MW. Besides, a small hydroelectric project is being completed at Arippara in Kozhikode. We are gradually foraying into commercial power generation as well,” said the official.

Flood mitigation
Following the harrowing days of 2018 deluge, Cial also implemented several flood mitigation activities. “We have completed projects worth C100 crore. The regulator-cum-bridge at Panjoor is the only remaining. We have built three bridges and deepened the diversion canal. With the effective implementation of the plan, we have managed to handle the flood that occurred in 2019. Awater transport connectivity to marine drive is also on the pipeline,” said the official.

Now we are on Telegram too. Follow us for updates
TAGS
CIAL Kochi airport Covid impact