From wearing funky clothes to school to finding his niche in art, Ashwin Chacko’s love for all that is wacky makes his work truly unique

KOCHI: Dublin-based multidisciplinary illustrator, designer and hand-letterer Ashwin Chacko’s biggest superpower is his background — a synthesis of vivid colours that can be attributed to hailing from Kerala, growing up in Mussoorie in an international school, studying in Chennai and Noida and later, living in Dublin. Augment it with kindness, positive vibes, social awareness and a generous sprinkling of quirkiness, and you have ‘Whacko Chacko’, a repository of his work influenced by street and contemporary culture.

“The ability to adapt has driven my capability to fuse different practices — like my hand-lettered type in conjunction with my illustration. Also, Whacko Chacko is a nickname I earned in high school for the quirky clothes I wore. So when it came to choosing a name for my business, it fit perfectly,” says Ashwin. With a design ethos that can shapeshift into happy illustrations for children’s’ books, eliminate grey space for a project in collaboration with the Dublin City Council, add a pop of colour to a shop or find itself at home amid ad campaigns, Ashwin’s finesse plays with storytelling, thereby finding a connection with every individual. 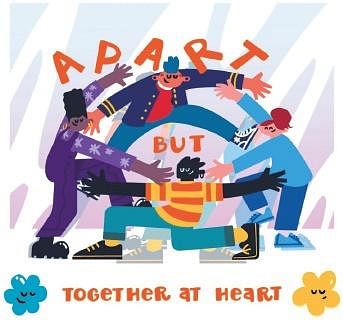 “As an introverted child, drawing for me was a way to experience the world around me and to express myself. The act of drawing to remember or to tell a tale is very intimate and intuitive. A story can reach past the many filters and walls we build and can touch the heart. This urge to tell a story is very present in my work today,” he says.

A conscious effort to bring a sense of joy to his positively playful work is indisputable. “I like to tackle serious or unconventional topics in a light-hearted way. This allows the viewers to see the piece and smile, simultaneously, and walk away with something deeper that hopefully touches the heart. My positive messaging and voice stems from who I am. This in turn, stems from my faith,” Ashwin explains.

From Ashwin Chacko to Whacko Chacko
“My mother says that I had questioned her at the age of five on making art my career. I’ve made that a realisation in many ways. I studied visual communication for a year before switching majors to animation and multimedia. Thereon I began my tryst in advertising as a graphic designer and transitioned to art director. Eventually, I leapt into being a full-time illustrator dabbling in varied mediums like Tshirts, products and murals,” he says.

Unlike several multi-disciplinary illustrators who may choose to quit freelancing and settle into more ‘stable art’, Ashwin never paused. “Even when I had a full-time job in advertising, I would come home and work on the freelance projects. It allows me to choose projects and pushes me to expand my abilities in creativity, discipline and business. My wife is Irish, so we moved to Dublin after the birth of my second child. The transition was tough but I spent the last five years building relationships and becoming a part of the creative community here,” he elaborates.

Being a hand-letterer
“Words can transport you into another dimension and I was curious about its intricacies.  So, I wanted to get hired to play with words. So I set myself a 30-day challenge to create one typographical quote every day. Later, I realised that all the quotes had a cohesive theme that reflected on my experiences as a freelance creative. My book ‘Keep At It’ was born of this project,” quips the illustrator.

‘Keeping at it’
Acknowledging that kids may find it difficult to comprehend the pandemic, Ashwin wrote and illustrated the book ‘Everybody had Fear’. “The book created an opportunity for parents to converse with their children about the crises around us. It was also intended to encourage children to realise that fear does not define us,” he says.

There’s more. Being a dad has led him to create an initiative ‘Fatherhood Crew’  which boosts fathers in their journey as parents. “The hope is to build a community of dads who can deepen their identities as fathers. In future, I hope to create more stories told through many mediums. I also want to uplift creatives on their journey,” Ashwin adds. You can find his work on Instagram @whackochacko.