Here is the story of how a Lamborghini Huracan ended up in the heart of a village in Pattambi, Palakkad, as part of the Italian sports car company’s global art and photography project

KOCHI:  Couple of months ago, in a small village near Pattambi, Palakkad, a curious teenager was wandering at dawn, collecting baby coconuts to make a little toy car. As he looked up, he saw something hiding in the lush green shrubs — eyes shining, its fluorescent green camouflaged against his village’s inky greenery. When he saw the sports car smiling back at him, the boy almost believed he was dreaming. Kerala-bred, Bengaluru-based artist Vimal Chandran’s entire village woke up to this visitor from the future that day – a Lamborghini Huracan Evo Verde Mantis, one of the most acclaimed 5204 cc sports cars from the Italian manufacturer.

Vimal is the only Indian artist to be part of ‘With Italy, For Italy’, a global photography and art project by Lamborghini. It started in Italy in September 2020, featuring 20 of the country’s finest photographers discovering the beauty, uniqueness and excellence of 20 Italian regions aboard a Lamborghini, thus signalling the rebirth of the country following the Covid-19 emergency and shining new light on the extraordinary wealth of treasure. 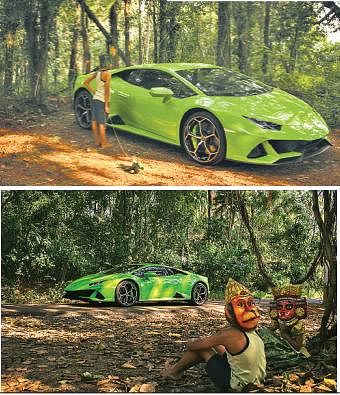 “This project was later extended to countries in the Asia Pacific Region including India. Kerala, having been the centre of India’s global expansion for centuries now, with trade connections to over 31 countries, including regions in Europe dating all the way back to 1st century BC, was undoubtedly a favourable choice to represent the country,” says Vimal.

“When I crafted the idea around my village and its life, I imagined bringing the past and present together. Lamborghini, to me and the world, is a name that signifies the future – in terms of design and technology. My village, on the other hand, is a mystical land with strong roots in the  past, with temples and demigods, paddy fields that extend to the horizon, slow moving lives and curious eyes,” says Vimal.

Much like he imagined, the sports car fit well into the village backdrop — borrowing its green from the paddy fields, tail lights slicing through its eerie dusk, racing down its zig-zag roads — like a gentle alien visiting the land of the gods.

“I was not keen on placing popular art forms like kathakali, for the sole reason that it wouldn’t be authentic. Everything in that video has ties to my past and childhood — poothan, thira and kaali were the gods our people worshipped. The velichappadu is a lingering presence that watches over the village. The idea was to keep all of that intact,” says Vimal. The video was created in collaboration with  Ordinary Secrets Films and Sharan Velayudhan, known for his ork in Soubin Shahir-starrer Ambili.
Watch on YouTube @Vimal Chandran