Protesting the incident, demonstrations were staged in Kashipur and Banduan areas of Purulia where copies of the advertisement were burned.

KOLKATA: An advertisement of a travel agency offering sexual services of Santhali Adivasi women to tourists has taken Purulia district of West Bengal by storm, with the public staging protests at Kashipur and Banduan demanding exemplary action against the travel agency. A complaint was lodged at Kashipur Police Station in Purulia on Saturday. 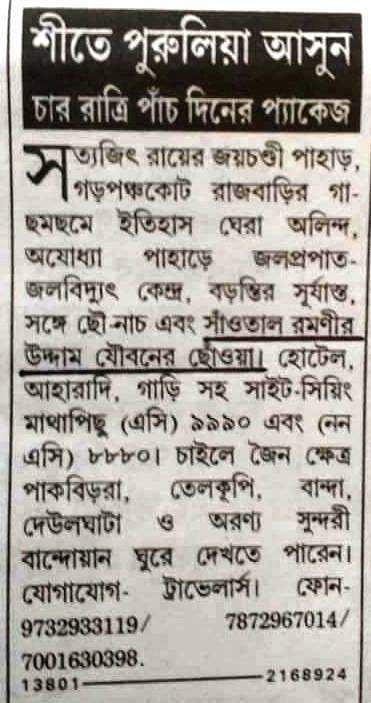 The advertisement, which appeared in a top Bengali newspaper, promised to offer sexual services exclusively of ‘young Santhali women’ to the tourists as part of tour packages to the tourist locations in Purulia district.

“Come experience Satyajit Ray’s Joychandi Pahar, the haunting history of
Garhpanchkot Palace, the sunset at Baranti, the waterfalls of Ayodhya Hills all along with the ‘sensual touch’ of the young Santhali woman,” the advertisement read.

Tourist footfalls to the western plateau district are usually high during winter, more so in the period from the end of Christmas to the New Year.

Santhali organisations have expressed concern for the safety of their womenfolk over such brazen objectification and sale of sexuality.

“We will intensify our movement against open sale of Santhal women’s sexuality, in the form of rallies and meetings in various parts of Purulia district starting from Monday,” Hembram added.

Protesting the incident, demonstrations were staged in Kashipur and Banduan areas of Purulia where copies of the advertisement were burned.

Meanwhile, Dalit organisations of West Bengal have pledged to take the movement against objectification of women of an oppressed community, to the state capital Kolkata.

“Such advertisements against a particular community violate the fundamental rights of the community members as guaranteed under the constitution. Legal action must be taken against travel agents for openly advertising flesh trade of women as part of tour packages. We are approaching the state government for exemplary action to prevent further selling of women’s sexuality in the name of tourism,” Saradindu Uddipan of Dalit Solidarity Forum said.

Kashipur Police Station in-charge Partha Kumar Bhunia said they have received the complaint and have initiated an investigation into the issue.