As she hits 84, dubbing artist P T Radhamani talks about her decades-long journey as a radio drama artist.

THIRUVANANTHAPURAM:Groomed as a singer, P T Radhamani never expected she would instead enjoy a long and exciting career as a radio dubbing artist. In fact, it was her passion for the craft that led her from being a budding singer to an acclaimed artiste.

T’Puram Express had a tete-a-tete with the renowned artist who mesmerised generations of radio listeners with her unique voice. As her family gathered together, ready to celebrate her 84th birthday on Tuesday, Radhamani looked back to her 20s when she was introduced to the world of voices and sounds at AIR Thiruvananthapuram.
In 1950, when Radhamani completed her ‘ganabhooshanam’ from Sree Swathithirunal Sangeetha College, she would tune into the radio. 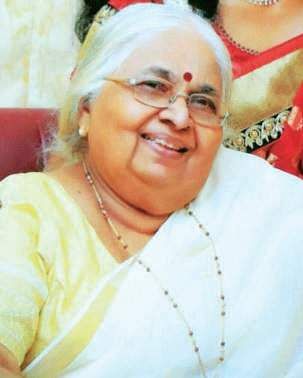 One day, she happened to listen to the voice of Saradhamani, a radio drama prodigy of the late 1940s. Her bawling and loud laughing left Radhamani stunned and seemed to transport her to another world. Saradha was her inspiration to take a chance on the radio with her voice.
However, Radhamani made her radio debut not with her voice, but through the jingling sounds of the glass bangles she was wearing. It was for a character who was taken to the hospital following a drowning incident.

“I was very fond of glass bangles at that time and my glass bangles got a part before I did at the microphone of the studio room,” said Radhamani, chuckling at the memory.
Later, when programme executive Rasheed was scouting for a voice in a drama adapted from Tamil, Radhamani got a chance to lend her voice in a major role in the drama. She had joined AIR as a contract staff by this time.

“We needed to learn the script by heart before the voice-over,” said the dubbing ‘celebrity’. “I forgot the script just before the voice-over. But the programme executive insisted on my voice and he arranged a car for me to get the script from my home at Manacaud.”
And there was no looking back for Radhamani. She slowly started to dominate the female voice space for AIR in the state and her voice was easily recognisable to Akashavani listeners from the 50s to the 90s.

She went on to marry a colleague and renowned radio artist, the late P Gangadharan Nair who was popular as ‘Radio Ammavan’ among the listeners through the ‘Balalokam’ programme.
Radhamani had several unforgettable moments in her professional life, but her most special memory was the appreciation she received from prominent author and social reformer Lalithambika Antharjanam.

“I was lucky to lend my voice to the adaptation of her acclaimed novel Agnisakshi. In fact, it was only a narration part. The drama received accolades from listeners and letters of appreciation came in from across the state. When then programme executive Saraswathy Amma who had a good relationship with the author informed her about the rousing reception from listeners, she replied the full credit goes to Radhamani for her excellent narration. I was on cloud nine on hearing this,” said Radhamani.
Radhamani had ‘played’ several characters, including Kannaki of Chilappathikaram and even radio stations from Thrissur invited her for reprising the role of Kannaki as the character had to showcase a range of voice modulations. Though she retired from AIR in 1993, she continued her passion till three months back.

Her vocal legacy continues through her children who dub for films and TV shows. Elder son G R Chandramohan was a leading dubbing artist in films who gave voice to many characters, including popular 80s romantic hero Shankar.  G R Kannan works for the Doordarshan Kendra and also directed 2001 Jayaram-Suhasini starrer Theerthadanam.

The youngest son G R Nandakumar, also a dubbing artist, was the voice of Nitish Bharadwaj in the veteran filmmaker P Padmarajan’s last film, Njan Gandharvan. G R Sreekala, Radhamani’s only daughter which whom she resides in Poojappura, is a retired chief manager of SBT.

Now we are on Telegram too. Follow us for updates
TAGS
artists P T Radhamani