Time to ‘screen’ some Kannada ‘drama’

Film buffs, get ready for three days of reel indulgence.

THIRUVANANTHAPURAM: Film buffs, get ready for three days of reel indulgence. The Kerala State Chalachitra Academy, in association with its counterpart in Karnataka, will conduct a three-day festival of Kannada films  beginning Saturday.

Screenings will be held at 11 am, 2.30 pm and 6 pm at Devipriya Theatre. The festival will open with the movie ‘Thithi’ (2015) directed by Ram Reddy. It will be screened soon after the inaugural function at 6 pm. ‘Thithi’ had earned international accolades after it won the award at the prestigious Locarno International Film Festival.

Day 1
Besides ‘Thithi’, films being screened on Day one are ‘Rangi Taranga’ (2015) directed by Anup Bhandari and ‘Nanu Avanalla.. Avalu’ (2015) by B S Lingadevaru 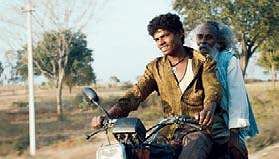 Malayalam Films Screened
As part of fostering cultural ties between the two states, a screening of noted Malayalam films was held in Bengaluru from August 11 to 13. The three-day film fete was also organised jointly by the Kerala State Chalachitra Academy and its Karnataka counterpart.

U Turn
Direction: Pawan Kumar
Rachana, a young reporter, is dismayed at the number of illegal u-turns and resulting traffic accidents, and she wants to write a story about it. In pursuing a lead, she finds herself in the middle of a police case dealing with a series of murders. While freeing herself of false accusations, she becomes part of the investigation process. What is behind the mysterious deaths and how are they all connected to the flyover road?

Vidaaya
Direction: P Sheshadri
Cast: Lakshmi Gopalaswamy, Suchendra Prasad, H G Dattatreya, Pratham
‘Right to Die’ has been a subject of debate for long in different parts of the world. The Indian Constitution allows ‘Right to Live’, but not ‘Right to Die’. There are differing views on ’Right to Die’. ‘Vidaaya’ probes the social, legal and cultural dimensions of this sensitive issue.  It is the story of the trials and tribulations of a woman trying to lift the spirits of her bedridden husband to keep him alive, even as he struggles to embrace a dignified death to liberate himself from the endless agony of a painful life which has become unbearable and meaningless to him.

Maarikondavaru
Direction: K Shivarudraiah
Three stories of renowned Kannada writer Sri Devanur Mahadeva were amalgamated to create a film. It revolves around a leader of feudal nature of a village and a soft-spoken youth who unravels the heinous deeds of the leader. The film with its powerful portrayal of the subject and the use of symbolism in an effective way reflects the travails and  tribulations caused by the prevailing social system.

Godhi Banna Sadharana Maikattu
Direction: Hemanth Kumar
Venkob Rao suffers from Alzheimer’s and has been admitted to an old age home by his career-driven son Shiva. Now settled in Mumbai, Shiva has come down to Bengaluru for a business meeting, the outcome of which could fulfill his dream of moving to the US. With Venkob going missing, Shiva is forced to confront the decisions he has made in the past while his dream of going abroad is all but realised. He begins looking for Venkob reluctantly with the help of doctor Sahana from the old age home. Along this reluctant journey, Shiva starts discovering little facets of his father’s personality while forging a friendship with Sahana. His search allows him to find all that’s missing in his life.

Ondu Motteya Kathe
Direction: Raj B. Shetty
Janardhan, a 28-year-old introvert Kannada lecturer from Mangaluru, comes to know from an astrologer he would embrace asceticism if he doesn’t get married within a year. Hearing this, Janardhan is now in a situation of trouble and desperation as he has never had a decent conversation with females all his life. And the proposals his family has sought also have gone in vain as he doesn’t look great, physically. He continues his search for a beautiful bride. In this journey, he faces various situations and conflicts which in turn give him a chance to revisit his core and experience self-discovery. Does Janardhan find his bride or does he embrace a spiritual path forms the rest of the story.

Rama Rama Re
Direction: D Satya
It is a story of a convict on death row escaping from prison and accidentally ending up with a veteran hangman who is called upon by the authorities to teach the job to the new staff. Their journey together along with a few others forms the rest of the story. It unveils the significance, strength and nuances of human bondage underneath the philosophy of birth and death, fear and rage, security and insecurity, fate and destiny.

Naanu Avanalla... Avalu
Direction: B S Lingadevaru
The film is based on the autobiography of ‘Living Smile Vidya’ (transwoman). Madesha is a boy who cherishes basic feminine characteristics. As he grows up, his wish to become a female grows stronger. Eventually, he gets acquainted with the appalling lives of transgenders, along with their conventions. He discovers a transgender is not accepted in society and is forced to make a living by begging or prostitution. Madesha transforms into Vidya to discover her own identity and fight against all odds to lead a dignified life. Vidya’s effort to move ahead in this formidable mission forms the crux of ‘Naanu Avanalla... Avalu’ (I am not he... She).

Rangi Taranga
Direction: Anup Bhandari
Gautam, a novelist, leads a reclusive life in Ooty. His latest novel is titled ‘Rangi Taranga’, a word which might hold the key to his past. Indu, a soft-natured girl, paints the cover pages of all his novels. A self-proclaimed journalist, Sandhya is in search of an anonymous writer who goes by the pen name Anashku. Unforeseen circumstances lead Gautam to Indu’s ancestral home in the village of Kamarottu. Upon his arrival, he befriends the post master, Kalinga, and the elderly school head master, Shankara. Gautam experiences a lot of strange occurrences and his investigation irks the powerful men in the village. Meanwhile, Sandhya’s trail leads her to Kamarottu. And then, the unexpected happens.