In a fight mode

For long, the nurses  had  suffered in silence. Now,  they are making themselves heard. Even if it means ruffling a few feathers

THIRUVANANTHAPURAM: With drooping eyes, Siny, a 32-year-old staff nurse sits at the United Nurses Association’s protest venue in front of the Secretariat. But  the fatigue’s only physical. It has not touched her resolve to fight for her rights.

Siny and hundreds of her colleagues in the capital are participating in the Secretariat dharna demanding pay revision for private hospital nurses. The nurses take part in the strike in shifts, after their duty hours.
Among them are people with 10 to 15 years experience but drawing less than Rs 10,000 a month. 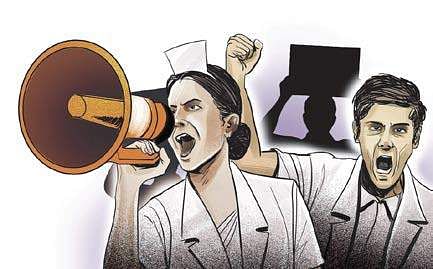 All these nightingales have a story to tell. A  sad tale of paltry wages and inhuman working conditions where a person is not even allowed to take food during the nine-hour-long shift.
According to Ramya, a staff nurse with a private hospital in the city, the strike is not just for a salary hike but to ensure some dignity to their profession.

“We are treated like slaves. We are not allowed to take food during the nine-hour long shift. Nurses are supposed to bring drinking water and if anyone drinks from the hospital facility they are fined Rs 500,” she said.

“In many hospitals nursing superintendents and shift in-charges are not professionally qualified. They act as per the diktat of management and abuse us in public, sometimes for no reason,” she added.
Some protestors said the managements are making efforts to sabotage the strike by offering rewards. “My hospital gave Rs 500 each to nurses who did not participate in the strike. Now I’m being given an offer of Rs 1,500 if I abstain from the strike,” said Nirmala, a nurse.

But Nirmala and her colleagues say such offers will not divert them their target. “This is a do or die situation for us. After decades of misery, our profession is set for a major breakthrough. We are determined to make this strike a big success,” she said.

The three-week-long strike has not affected the functioning of any hospital in the city so far. Office-bearers of the UNA and INA said they will be forced to strike work if a consensus does not evolve by Thursday.

‘Fix basic pay at Rs 20,000’
We want the basic pay to be fixed at Rs 20,000. In the last meeting with the managements we were offered Rs 17,200. We didn’t accept it. We will not withdraw from the strike until hospitals agree to pay the minimum salary of Rs 20,000 a month, the amount fixed by the Supreme Court. We are hopeful the government will help us in this fight. Hospitals do not give periodical increments. I get a paltry sum as salary though I’ve eight years of experience.

‘Professional slaves’
WHospitals consider nurses as professional slaves. As per rules, a trainee’s tenure should not exceed six months. But you can find nurses working as trainees for 5 to 6 six years in our hospitals. We are exploited by big corporates who mint money from the sector. There are hospitals which charge Rs 75,000 to Rs 1 lakh from patients. They charge anything between Rs 1,000  to Rs 3,000 as nursing charge per day. Why can’t these hospitals give decent wages to nurses?

‘We work on empty stomachs’
Major hospitals are trying to beat star hotels and we are asked to behave in a subservient manner. These luxurious hospitals do not employ sufficient number of nurses and the staff have to work hard to cater to all the patients assigned to them. Some doctors abuse them in public, especially if a patient complains of some lapse. Doctors are not ready to hear our version and abuse us in front of patients to make them happy. We are not allowed to take food during shifts. During some shifts like the 7 am to 1 pm we work on  empty stomachs. Though the shift is supposed to end at 1 pm, it takes another two hours to complete the assigned duties. When we take up the matter with the management, they say ask us to ignore the doctor’s behaviour. But there are good doctors too. They have wished us all success in this strike.

‘Male nurses suffer more’
Not many know that the male nurses suffer more than our female colleagues. Since we are small in number, we do not have separate changing room. We have to wait until all female nurses vacate the changing room. There is no money for overtime work, which is imposed quite often. Many hospitals ask new recruits to sign blank stamp paper. On this the management executes a bond unilaterally. Rs 10,000 to Rs 50,000 is collected as surety. If anyone leaves before the bond period they have to forfeit the money. Also, hospitals deny experience certificate and pending wages to staff who quit.