’Tis better to have loved

THIRUVANANTHAPURAM: FAIQA Mansab’s debut novel, This House of Clay and Water, is set in the old streets of Lahore, Pakistan, where she lives and works. The story is one of forbidden love, as it sets up the fragile premise of a relationship between a girl married into an affluent family and a transgender individual, played out in a manner that questions religious and societal  norms. For a  contemporary account, Mansab’s prose is elegantly poetic, focusing on the matter of emotions. In an email interaction, the writer spoke about reactions to English language writing in the subcontinent, and the need to be human.

You’ve spoken about the idea that your “very identity is a site of resistance”. Did you have to struggle with that idea, on a personal level?

It’s not a new realisation and I am who I am perhaps because I don’t run away from painful truths.
A woman is a minority. I am a woman with the level of education that is still considered rare for anyone in Pakistan. Even ostensibly well-educated people don’t really know what they’re talking about when they use words such as ‘feminism’, and it’s depressing to see. 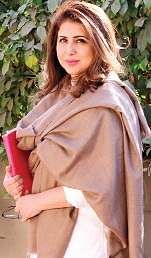 I am a writer who writes in English, about subjects that are taboo, especially for women. English is not my first language, and yet I write in English. Appar-ently, these things are still relevant in 2017 to the majority of South Asians. So, as a writer too, I am a site of resistance, and as a person of colour.

Tell us about your thoughts on writing as an act of self-assertion, and also of self-preservation.
It is definitely an act of self-assertion and freedom for me.It is also an act of arrogance in a way, because you feel that what you have to say is important enough for people to read. A writer starts at an early age; when she is a reader, an empath, or a person who feels things more deeply than other people perhaps? Someone who is meant to be an artist and isn’t, lives
an unhappy life I think, or at least a dissatisfied life? So, in that sense, it is self-preservation, perhaps.

And how does one combat the loneliness, while being so engrossed in one’s thoughts?

There have been very few times in my life when I’ve felt lonely and it was never when I was writing.
I’m happiest when I’m writing. Every story is a bit like a puzzle
and you’re trying to fit the pieces together and every time things fall into place, it’s a victory.
Writing is a Protean struggle. A story is an organic thing, and it must grow with care and attention, and not by force.

The elements of gender, sexuality and politics can be quite potent. Are you wary of reactions in the media, and among sections of the public?

I don’t worry about anything but how my story works. I don’t care about anyone except my characters and their journey. I cannot control or predict reactions. All
I can do is to write a good story. That’s all that I’m trying to do.
I feel that Indian readers are more open to different subjects and of intelligent discussions when they come from outsiders than they are from their own writers. That’s true of Pakistani readership as well, although the Indian readership is far wider.That’s problematic, because both countries have a lot of wonderful writers who are stars internationally, but are not given the same importance at home. Very few universities are teaching Indian and Pakistani writers in their syllabi, because they
are considered too political. Institutions like education should be neutral.

Have you received any flak for your anti-religious statements, especially about “forgetting to be human in the quest to be Muslims”?

I don’t believe I’m anti-religious. However, if any religion is appropriated by terrorists, ignoramuses and idiots, then I, along with any thinking human being, will raise a voice against it. Being a good anything means first, to be a good human being.

Is it fair to ascribe bestiality to  religious persuasions?
Bestiality is a part of us, but we as humans have been given the faculty to think, and to tame our instincts, passions and actions. When we don’t do that, we become beasts. It has nothing to do with religion or commerce. It has everything to do with intemperance, with the inability to reform and evolve as social beings, as a society. We are regressing as a race. We are falling into Neanderthal-like patterns of territorial instincts, of clannish mentality, a safety in numbers approach when we should have been celebrating diversity, plurality, freedom of speech and choice.

Read the complete interview at indulgexpress.com The House of Clay and Water, Penguin Random House, `499