Kerala Evergreen FC’s logo has an uncanny resemblance to that of the Irish side Bray Wanderers FC.

THIRUVANANTHAPURAM:It was with much fanfare last week that the capital witnessed the launch of Kerala Evergreen FC, the new professional football club from the city gunning for a spot in the upcoming edition of I-League which is country’s top division football league.

However, they have landed in hot water after it was found out that the club crest they unveiled on July 18 had an uncanny resemblance to that of Irish side Bray Wanderers FC.
Evergreen FC’s crest had featured a gold tinted hornbill, the state bird of Kerala, in a circular design which predominantly featured green and white colours that the club had claimed to ‘symbolise the state of Kerala’.

However, a week on, a few keen-eyed Twitter users noticed the logo’s similarities with the club crest of Wanderers, a club which was found in 1942 and operates in the League of Ireland Premier Division. On inspection, Evergreen’s logo is a carbon copy of Wanderer’s logo with just the club names changed and the Wanderer’s seagull replaced with a hornbill. There is no wonder why football fans vented their anger at the Evergreen management. “Hopefully you can give a reasonable explanation to KEFC fans,” wrote Twitter user @runjosliv. 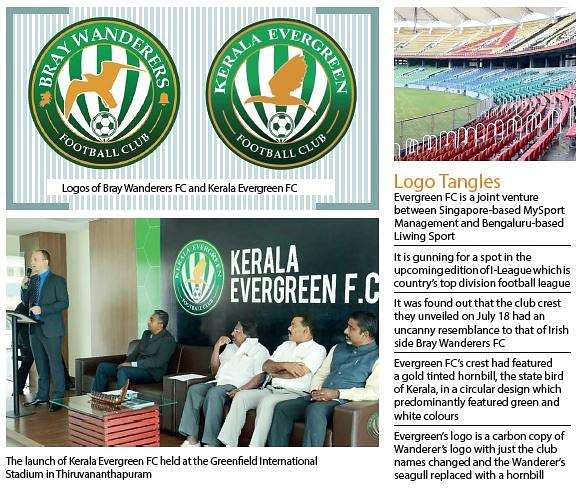 While others announced their unshakeable support. “No matter what we will always support our dream team,” said Shefin Gonzalvas. Some others saw the funny side to the incident. “Presumably Bray have explored the possibility of securing their future by simply suing Kerala Evergreen,” noted Back Page Football referring to the financial crisis the Irish club was in until recently.

After it had become a topic of discussion on social media, Evergreen FC apologised to their fans and Bray Wanderers while also removing the logo from all their social media accounts. “Dear fans, our apology for current situation regarding KEFC official logo,” the club posted on their official twitter account.
“The graphic design was ordered from an external company, based on specific criteria including shape, colours and symbols. The club will contact Bray Wanderers in this matter and has started an internal investigation,” it said apologising to the Seagulls.  Meanwhile, the club’s efforts to win a direct entry to I-League is progressing in the right direction after picking up the bid documents from the All India Football Federation. Evergreen and Malappuram-based Gokulam FC are two of the five Indian clubs who are in the fray for an I-League berth. Evergreen FC is a joint venture between Singapore-based MySport Management and Bengaluru-based Liwing Sport.