THIRUVANANTHAPURAM: Dr D L Bhavendu is a busy man. Straddling between a medical profession and film making is no easy task, but the doctor who is currently practicing at two major hospitals in the city, says it is passion that drives him on.

And his efforts are not in vain. Most recently, Dr Bhavendu’s debut short film ‘Dwandam’ has been selected to the competition section of the International Documentary and Short Film Festival of Kerala. The fest will be held in the city next month. 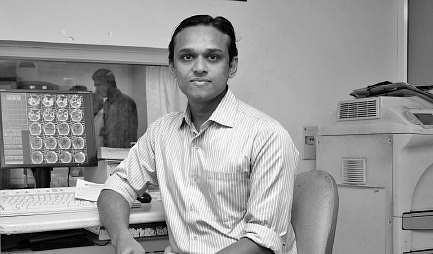 According to him, the six-minute-long film has been selected under the campus films category. Actors Bilas Nair and Sajitha Madathil play the characters. Dr Bhavendu has directed the play. He also worked at the screenplay for the film.

“The title Dwandam which means duel speaks about the inner conflict of the mind. The plot revolves around two characters,” he said.  Dr Bhavendu recently finished a two-month weekend crash course on filmmaking from L V Prasad Film and TV Academy, Chennai. He made the short film as part of the course project.

Turning filmmaker
Dr Bhavendu who was a lecturer at the Medical College is now a practising consultant radiologist. Bhavendu says the filmmaking bug bit him after his predegree. “I was very inspired by  programmes on late filmmaking legend Satyajit Ray on Doordarshan,” he said.

Happy about his debut reaching the international short film fest, Bhavendu said, “Filmmaking was always a passion for me. After my MBBS course, I tried applying to the Pune Film Institute, though it didn’t work out. If I hadn’t pursued my medical career, I might have made filmmaking my career. “

The filmmaking enthusiast has also been a continuous presence at the IFFK for several years, finding time to take part in the film festival as a delegate. He adds, “The first festivals were at Kozhikode and Kochi, so I was not able to participate. However, ever since IFFK came to the city, I have been taking part in it, even in the beginning when there was no delegate system. Back then I was doing my MBBS course.”
The doctor hopes to continue making short films in the future.