The Sports Hub, Trivandrum at Kariyavattom is all set to witness the first ever T20 international
cricket match to be held in the state tomorrow.

THIRUVANANTHAPURAM: Folks, the big day is here.  The Sports Hub, Trivandrum at Kariavattom is all set to witness the first ever T20 international cricket match to be held in the state on Tuesday.
Come and enjoy the shortest form of cricket between Indian and New Zealand on our soil after a gap of two decades. According to the officials of  Kerala Cricket Association (KCA), the game is expected to bring a new sporting culture in the city. It is expected the fans will flock in large numbers to the city to see their favourite players in action.

The stadium with top class infrastructure gears up to welcome the cricketers and fans. KCA officials said this is the first time the entire tickets got sold out within a few days. Officials have already made arrangements to give the viewers four hours of entertaining match viewing.

Excited fans
Fans in the city are all excited to see the match at the brand new world-class stadium.
“We can’t wait anymore. Since Tuesday is a working day,  we have decided to apply for leave so as to get to our seats much earlier.  We also hope the rain will not play a spoilsport,” said Harikrishnan, a cricket fan.

For the cricket lovers of the 80s, this match will be a flashback to the first two international cricket matches that were held in 1984 and 1988 in the state.  While the first ODI in Kerala was a washed out affair between Sunil Gavaskar’s India and Kim Hughes’ Australia, the second ODI saw a strong West Indies side, featuring the likes of Vivian Richards and Richie Richardson, trouncing the home side led by current India coach Ravi Shastri by nine wickets.

However, fans are equally disappointed over the instructions set by the police. The police department has put restrictions on flagpoles and other components.“I don’t know why the police have restricted flagpoles and other materials inside. Security restrictions should be imposed but not at the cost of our excitement. I think it may put a dampener on the overall excitement,”  said Sooraj Kumar, a cricket fan.  Meanwhile, Jayesh George, KCA secretary, told T’Puram Express, flags and drums are allowed inside the stadium, but sticks for the flags are not allowed. 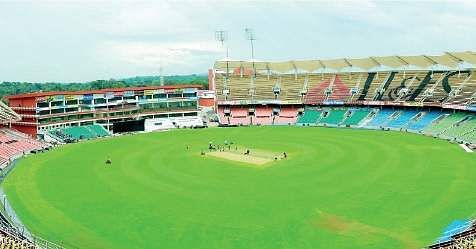 “The stadium is all set. Some finishing touches are the only ones left and they will be completed in a day. New Zealand will have a practice session on Monday while the Indian team has informed they won’t come for the practice session. There will be two big screens at the stadium and many small screens have been placed at various points too.Around three rows in the stadium will be closed to keep the black screens,” Jayesh said.

A mobile application has been introduced by KCA to help the public with smooth parking. The application ‘Spacy T20 Trivandrum’ can be downloaded from Google Play store on the match day.

Medical emergency services
The medical emergency response team will be available at the first aid kiosks. Ambulance services will also be there in case of an emergency. Firefighting equipment has also been arranged and an emergency exit plan has been arranged if any sudden evacuation is needed. The zero-waste protocol will be enforced with the support of the City Corporation and the Suchitwa Mission.

Kudumbasree, prisons and Milma to cater food
Kudumbashree, prison department and Milma have been contracted to cater to the food requirements of the spectators and Pepsi will be the official partner. They will be providing soft drinks and water. The restaurant in the stadium too will be providing refreshments. The food counters are available at all the sectors of the stadium. Each catering units have more than 10 counters.