Preparing to take summer head on

Latest among the series of initiatives is to dig 125 farm ponds in six panchayats that come under Kattakada Assembly constituency.

THIRUVANANTHAPURAM: With barely three months left for summer, Kattakada Assembly constituency in the capital is making an all-out effort to recharge its water bodies and raise the water table.Latest among the series of initiatives is to dig 125 farm ponds in six panchayats that come in the constituency. Work on 32 ponds is nearing completion. Of them 14 are in Vilavoorkal panchayat, seven in Pallichal, six in Vilappil and five in Malayinkeezhu. At least one pond will come up in each local body ward in the constituency.

Of the 125 ponds planned, 90 will be dug by next month, said Land Use Board commissioner A Nizamudeen who is the coordinator of ‘Jalasamridhi’, the water conservation project in the constituency. 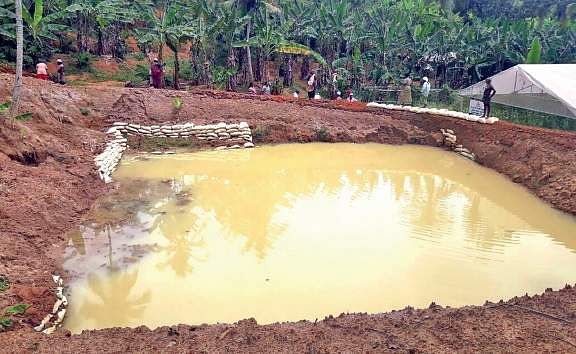 The project has received wide support from the local people and a good number of ponds are coming up on private properties. “We’ve selected catchment areas in slopes and valleys to dig the ponds. Individuals have been approached in areas where public land is unavailable. Everywhere, people readily offered their land,” he said.

The ponds are dug by workers under the Mahatma Gandhi National Rural Employment Guarantee Scheme (MGNREGS). Apart from the primary aim of rainwater harvesting, the ponds will also be used for pisciculture and to grow aquatic plants.

The new ponds come in two categories - bigger ones measuring 20 m in length and 15 m in width and smaller ones of 15 m length and 10 m width. Next phase of Jalasamridhi will see rainwater harvesting in abandoned paddy fields. Eco-friendly bunds will be set up around the paddy fields to convert them as reservoirs. Another initiative is to set up 100 plant nurseries. The first nursery became operational in Minnamcode ward in Vilappil panchayat. Fifteen more will come up in different panchayats. The project targets to supply one lakh saplings of fruit-bearing trees in one year.

Launched in 2016, ‘Jalasamridhi’ is a multi-pronged approach to raise the water table in the constituency. Other initiatives under the project are renovation of canals, rivers, recharging of wells and ponds.

Renovation of 70 canals is the highlight of Jalasamridhi project. Conservation activities launched to save the Kaduvakkuzhi-Anappad-Machel canal had hit headlines last month.

B Sathish MLA and District Collector K Vasuki led a six-km-long trek to spread awareness among local residents. A masterplan for the canal conservation was prepared and works have been started.

As per the plan,  minor earthen check dams will be built on the canal at every 200 m except at the meanderings. Gabion structures will be  erected (cage-like  structure filled with  rocks) across the river in five spots downstream.

An ongoing conservation project is taking place for Kadinjeel canal in Nadukkad ward of Pallichal panchayat. Small bio check-dams are being set up in the canal using local materials.

Well recharging programme was launched in five government shcools. Two wells each of the  Kulathummal HSS, Nemom  UPS, one each of  Vilavoorkal HSS, Machel  LPS, and Kandala HSS were included in the project.

Two harvesting pits were dug near each well. The pits are 1.5 m in diameter  and two metre deep. Rings  were erected and the ground was filled with  gravel. Water falling on  the rooftop is directed to the pits through pipes.  Pits have been covered  with concrete slabs for safety.

The programme will be launched in 10 other schools shortly.

Stay up to date on all the latest Thiruvananthapuram news with The New Indian Express App. Download now
TAGS
Kattakada Assembly summer