One nation, one script: Bharati is the common script for all Indian languages

The motto, like the script itself, is simple - one nation, one script. Meet ‘Bharati,’ the common script created by IIT-Madras for all Indian languages.

THIRUVANANTHAPURAM: The motto, like the script itself, is simple - one nation, one script. Meet ‘Bharati,’ the common script created by IIT-Madras for all Indian languages. The project has entered its final phase and the Computational Neuroscience Lab under the IIT’s Biotechnology Department has now brought out a Bharati-Malayalam primer. 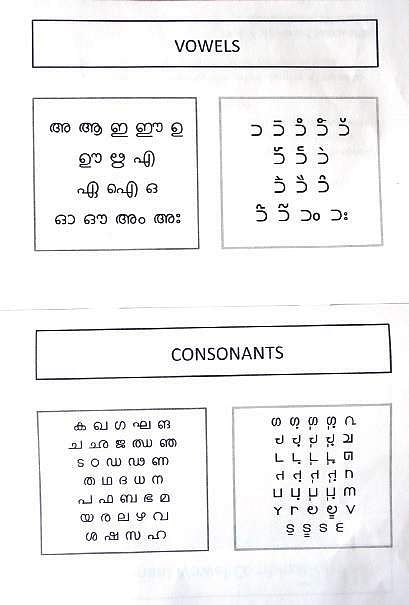 ‘’The idea behind Bharati is just this; the script should be undemanding, logical and easy to learn. India has 22 languages and approximately 1,652 dialects written using 11 scripts. Bharati can replace all of them,’’ said Krishna Bharadwaj M S, research associate and the Keralite in the Bharati team headed by Prof V Srinivasa Chakravarthy. The team has launched efforts to popularise the script across the country, said Bharadwaj, who belongs to Thycaud.

Bharati has, in general, 17 vowels and 22 consonants. For Keralites, Bharati endeavours to replace the intricate Malayalam characters - which beginners often find quite baffling - with its straightforward form. Each alphabet in the Bharati script is constructed in three parts: the main character which forms the middle part and then there are the top and base parts. The chief portion of all the vowels, for instance, is formed by a character that resembles a ‘c’ in reverse.

“The top part signifies the changing vowel sounds and the lower, the consonants. The script has been created by choosing the simplest characters from all Indian scripts and the Roman alphabet. Some have been modified,’’ Bharadwaj said. For example, Malayalam has contributed ‘Ga’ while Devanagari has provided ‘Cha’ and Tamil, ‘Ta’ and ‘Pa.’ Five alphabets are there from the Roman alphabet - V, S, Y, R and N.

Naturally, the question arises why a country which prides itself on enjoying unity in diversity should ever require a common script. Besides, the mother tongue is a touchy issue, more so in the south where the feeling is deep-rooted that Hindi attempts to smother all other Indian tongues. The idea of a common script, asserts Bharadwaj, is entirely different. ‘’Bharati does not seek to replace languages, but scripts. It makes the study of Indian languages simpler. For example, the character for ‘A’ in Tamil and ‘Bha’ in Hindi look identical but sound different. Isn’t that utterly confusing for a person who attempts to study these languages?’’ he asks.

Now we are on Telegram too. Follow us for updates
TAGS
IIT-Madras language