Books in the woods

A small library at Aattumanpuram in Vithura is making gradual changes in the tribal belt. Set up three months back by charitable organisation Changathikoottam, the library aims to inculcate a reading

THIRUVANANTHAPURAM: A small library at Aattumanpuram in Vithura is making gradual changes in the tribal belt. Set up three months back by charitable organisation Changathikoottam, the library aims to inculcate a reading habit among youth and women in the area. 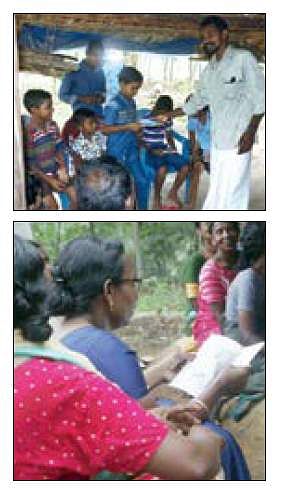 A cardboard shelf in a makeshift building is stacked with fiction, general knowledge books and magazines. “We had a campaign to collect books in July,” said Changathikuttam secretary Jiju K Nair. According to him, the local people who are interested in reading regularly take books and promptly return them after use. A register kept here tracks the movement of books. Presently, the library functions out of a house, but it will soon be shifted to the community hall. The collection will also be expanded with the shift.

Changathikoottam which is celebrating its first anniversary, plans to focus more activities on improving the quality of life for Adivasis, including providing training to Adivasi youth for competitive examinations. “We will conduct monthly classes in the Adivasi hamlets of  Vithura and Kottur,” said Jiju.
First birthday

Changathikuttam, consisting of a group of 25 volunteers, is celebrating its first anniversary at Hassan Marikar Hall on October 15. Member of the erstwhile Travancore royal family Gowri Lakshmi Bayi will inaugurate the function felicitating 15 people, including traffic police, social workers, people who runs destitute homes, ambulance drivers and sanitary workers, who have made exemplary contributions to society.

DTPC secretary Prashant T V will present mementos to the NGO’s supporters. Playback singer Akhila Anand will present prizes to winners of a painting competition held in the Adivasi area. Children from Agastya Kutiram Balika Sadanam will present cultural programmes. The function will close with a musical performance by students of an engineering college in the city.