A former police driver and his wife, who extorted  money from people by lodging fake complaints of sexual assault, were arrested by the Kattakada Police.

THIRUVANANTHAPURAM: A former police driver and his wife, who extorted  money from people by lodging fake complaints of sexual assault, were arrested by the Kattakada Police.

The accused are Pushkaran Nair, 65, and Sasikala, 43. The couple lived in a rented house at Kanchiyoorkonam at Kattakada. The arrest was carried on the basis of a threat issued to their landlord’s son-in-law.

“The accused had lodged a fake complaint at the Kattakada police station stating the man tried to  sexually abuse their daughter. They demanded Rs 20 lakh for withdrawing the plaint,” the police said. 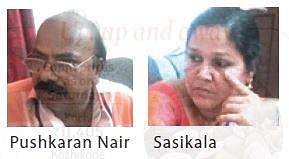 The man gave Rs 10 lakh by cheque and opted to approach the police when they demanded the balance amount. The Shadow police launched a probe. The probe revealed the complaint was made up.

On being quizzed, Pushkaran and Sasikala confessed to the police their intention was to extort money by levelling trumped up criminal charges.

Officers said the accused had committed a similar fraud at Neyyattinkara. “There also they lodged a complaint of sexual assault against the then landlord and demanded Rs 10 lakh to withdraw the plaint. However, the man refused to cough up the money and instead filed a complaint,” police said.