Want to go but can’t find a loo in Thiruvananthapuram? Hop onto a mobile toilet!

The city has a problem with public toilets. There are a few comfort stations built by the city corporation and a few by Women’s Development Corporation in the city.

THIRUVANANTHAPURAM: The city has a problem with public toilets. There are a few comfort stations built by the city corporation and a few by Women’s Development Corporation in the city. But a family which goes out visiting in the city often feels the inadequacy of clean toilets, especially at a public function. An apt example is the venues where Onam programmes were organised by the Department of Tourism. In the case of the major venues, only a few have toilets. Kanakakunnu ground, one of the main venues of the festivals has the best facilities.

But the numbers were not sufficient to cater to the huge crowd that  turned up.“We think twice before taking our children to crowded public toilets. Cleanliness and hygiene are a matter of concern. So, in the end, we are forced to go to a restaurant to use the toilet there,” said Vijayakumar, a visitor to Kanakakunnu. To ease the ‘toilet problem’ corporation has purchased four mobile toilets. Each custom fabricated mobile structure has 10 toilets. The structure can be taxied away to locations where public functions are being held. 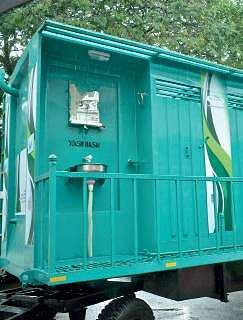 Each structure carries a water tank that can hold 1,200 litres of water and a storage that can collect 1,200 litres of waste. The waste can be drained using suction pumps.  “Corporation used to operate mobile toilets. The new toilets have been purchased to replace the defunct ones,” said an official of the corporation.Mayor V K Prasanth flagged off the vehicles on Thursday. According to officials, the inauguration was done hurriedly considering the requirement during Onam celebration which ends on Saturday.

‘Kalari’ started
With an aim to promote sporting talents, the corporation started the Kalari programme to impart training in various games. 500 students from the government or aided schools in the city will benefit from the programme. They will be trained in athletics, football, volleyball, basket ball and swimming at the Lakshmibai National College of Physical Education (LNCPE), Kariavattom. After the initial 6-day residential training they will continue to get training on weekends at Central Stadium. The corporation will be spending Rs 70 lakh for the programme under the people’s plan initiative.