The profits of serving the poor

The In-house Drug Bank near SAT Hospital offers most of the medicines at prices lower than other subsidised medical stores in the capital.

THIRUVANANTHAPURAM:While the drug prices are inexorably going up, a government-run store in the capital offering medicines, healthcare and surgical equipment at the lowest rates, is visited by thousands of people everyday.The In-house Drug Bank (IHDB) offers most of the medicines at prices lower than that of the different subsidised medical stores in the capital, including the Karunya Community Pharmacy.

Started in 1996, the drug bank levies profit in the 0-5 pc rate subject to a maximum of Rs 50. “A maximum ceiling for the profit was fixed since even five per cent profit would run into thousands in case of high-cost drugs for cancer or kidney ailments,” says Biju A, chief pharmacist of the drug bank.

The drug bank was the idea of Dr Hariharan S, former superintendent of the SAT Hospital, says Biju, who was among the founding team. For the first five years, the drug bank catered only to the SAT patients. In 2001, it started serving the general public as well.

The IHDB is situated adjacent to the main gate of the SAT Hospital and is open round-the-clock on all days. The store has almost all drugs ranging from lifestyle medicines to costly drugs for the treatment of cancer, kidney diseases and liver transplantation.

The IHDB is a big relief to patients in need of costly drugs, like those who have undergone kidney transplantation, says Biju. “Private stores make big profit through the sale of such life-saving drugs. We’ve hundreds of kidney patients as regular customers,” Biju said.

Biju claims that the IHDB rates are the lowest in the state. “The prices are cheaper than the Karunya Pharmacy, Neethi Medical Store or even the Jan Aushadhi Store. Rare medicines will be made available upon demand,” he said.

The drug bank is run by the Sree Avittom Thirunal Hospital Health Education Society chaired by the Health Secretary. It has 36 staff members. The annual turnover is witnessing a steady rise every year - from Rs 15 lakh in 1996 to Rs 45 crore in 2017. Income tax paid last year was Rs 18 lakh.  The state-run Karunya Community Pharmacy was modelled on the IHDB. 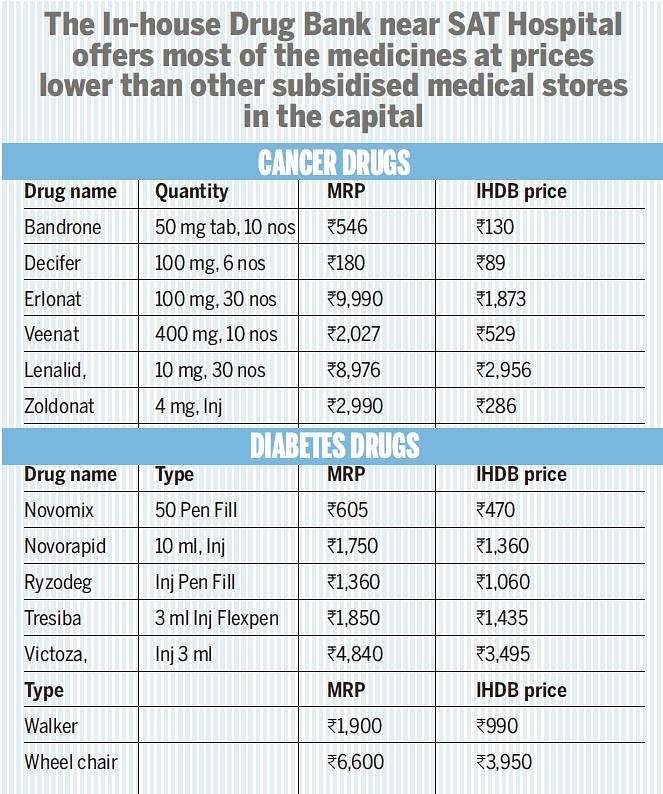