Any classical music educator would be proud if years later their student says “I don’t think in terms of notes, but in swaras.”

THIRUVANANTHAPURAM: Any classical music educator would be proud if years later their student says “I don’t think in terms of notes, but in swaras.” In quotes are the words from the mastermind
powering Bengaluru-based act Pineapple Express which pairs traditional ragas with other influences like progressive metal and electronic music.

“Indian classical is the platform that I build our music on. As a result, we’ve got positive reviews from people from three generations who have diverse tastes,” says Yogeendra Hariprasad, who performs keys and vocals along with composing duties. The band—which is part of the upcoming NH7 Weekender festival in Pune—lets us in on what’s happening in the jam room as they’re preparing to play at Kochi Rocks this weekend. 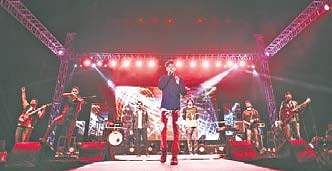 New approach
Rising from the ashes of the defunct Eeswara project in 2016, the unique brand of fusion from this eight-member team (also including Arjun M P N, Bhargav Sarma, Gopi Shravan, Jimmy Francis John, Karthik Chennoji Rao, Ritwik Bhattacharya and Shravan Sridhar) offers no space for juxtaposition with any other artiste.

The sound of the project is heavily indebted to this keyboardist’s rearing by a veena-player mother. “Our earlier vocabulary was massively dependent on Carnatic music, but then my musical direction changed. Now, there is more space for other influences including jazz and djent which are laid over classical melodies,” says the 24-year-old. His first encounter with western music being the progressive metal outfit Dream Theatre also shows through in the formation of Pineapple Express.

Their EP Uplift released earlier this year reveals an absolute disregard for ‘radio-friendliness’ with four songs including The Mad Song and the title track structured unconventionally and running over six minutes.

Evolving melodies
Ask him about the songwriting process of such eccentric compositions and he explains that it’s all about freedom. “There are absolutely no restrictions.

There’s no such thing as a bad riff or idea—it’s all about the context. If some jazzy idea comes around, it’s about placing it aptly,” says the keyboardist, who also informs that a track might evolve from a vocal melody or a drum groove. Showing no reservations for exploration, their new track Money even exhibits hip-hop elements. The act also relies on visual projections to enliven their high-energy live sets. With a few single releases in the pipeline, they’re also aiming at an album by mid next year.