No end to mishaps

According to statistics, nine persons lost their lives in various accidents which took place in the past seven days

THIRUVANANTHAPURAM: Even as the city traffic police have been conducting special drives and awareness campaigns for the past one week to ensure all motorists comply with the rules, data present a dismal picture. According to statistics, nine persons lost their lives in various accidents which took place between January 4 to 11. 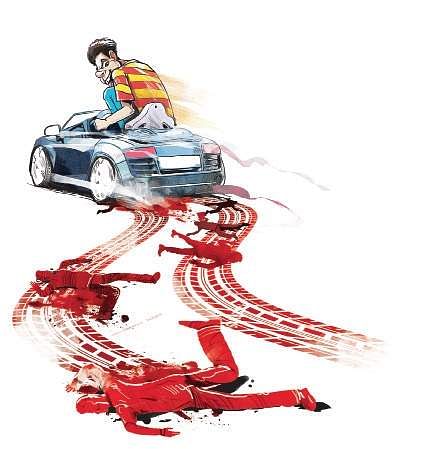 As many as 68 accidents, in which around fifteen people sustained serious injuries, have taken place within the city limits from January 4 to 11.  The special drive began on January 4 aiming to reduce the number of accidents.

The total number of traffic offences registered from January 4 to 11 is 3,772. The figure shows an average of 400 cases is being registered on a daily basis.  Sources with the traffic police said the accidents are the fall-out of drunken and rash driving.

According to data available with the traffic police, a total of 60 drunken driving cases were registered in the past seven days. All the offenders were asked to attend a special training session after which their vehicles were released to them.

Even though the police have kept barricades at various points on different roads, youngsters find ways to dodge the hurdles to indulge in the passion for driving at high speeds. Their favourite haunts are roads such as Vellayambalam-Kowdiar Road and the newly developed NH bypass. Many youngsters were fined and warned to ride at normal speed, police said.

Meanwhile, motorists blamed the authorities for the accidents. They cite pothole-filled roads and bad lighting as the reasons for the accidents.“Many accidents take place during the night. The lack of proper illumination on the stretches and absence of signages makes driving very difficult in the night. For instance, there are no streetlights on the newly developed NH bypass. This puts the motorists at risk in the late hours.  Apart from the enforcement drive, the authorities should give importance to maintain the roads,” said R Jayasekhar, a techie working in Technopark.

City Police Commissioner P Prakash said the drive was started as a long-term measure to prevent accidents in the future.He blamed road user’s unruly behaviour for these accidents. “Even after awareness campaigns had been conducted with an aim to reduce accidents, the motorists act irresponsibly while on road. We can’t stop them always. We had been conducting awareness campaigns for the past one week as part of the drive to make the roads safe. But the motorists should also be ready to abide by the rules.

They will only be aware once the fine for the traffic violations is increased. However, the total number of offences have gone down compared to the previous years and this is a good sign,” Prakash said. kash said the routine vehicle inspections to nab those who drive without helmets and seat belts will also be intensified.