Thiruvananthapuram could prove a cliffhanger for rival fronts for general elections

The capital region has proved positive for UDF's Shashi Tharoor in the last two general elections.

THIRUVANANTHAPURAM:  “Our lives are worthless, but our votes are priceless,” fumes 58-year-old Mariya, a fish vendor at Chalai, the capital city’s iconic marketplace. She’s among the many who lost their shanties in the recent sea erosion, and who found themselves virtually dumped in an open, single room anganwadi along with 12 families from the coastal belt of Valiyathura.

“Elections happen with clockwork precision, but we remain desperate as ever. We would have got the Rs 10 lakh promised by the government post floods, only if we had some land. Is it our fault that we lost everything?” she rues. With a substantial fishing populace here, any move to alienate them could prove to be suicidal for the candidates. Small wonder why Shashi Tharoor couldn’t wait to cure himself of his ‘squeamish’ remarks. 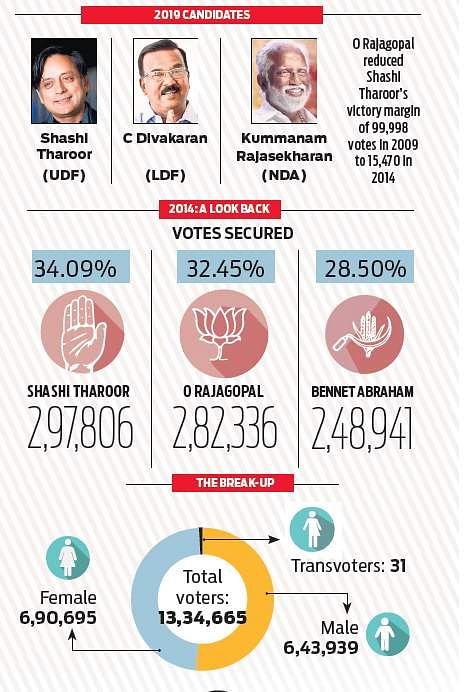 At the junction, a group of elders are engaged in a heated political debate, which has all the making of a brawl. “Despite the coastal erosion, there has been no major intervention from the candidates so far,” says 77-year-old Baby, a veteran fisherman. “ Tharoor, the outgoing MP, did turn up once. He was honest enough to say that he can do something after the polls!” he says.

As Thiruvananthapuram gears up for a gritty three-cornered fight among Congress’ sitting MP Tharoor, senior CPI leader C Divakaran MLA and former Mizoram Governor Kummanam Rajasekharan of BJP-NDA, it is naturally one of the most keenly watched constituencies in the state. Spread across the capital district bordering the Arabian Sea and the Western Ghats, the constituency has a substantial urban presence which coexists with a considerable fisher and tribal populace, in addition to the minorities.

A straight drive through the chaotic coastal belt from Veli to Poonthura -  ravaged and famished  post Ockhi and floods- only reinforces the bleak lives led by the fisherfolks here. A section among them are even contemplating boycotting the April 23 polls. At a time when campaigns continue at their peak across the capital’s urbanscape, those on the sidelines continue to stand by, neglected. Equally furious are those on the other side of the constituency. Driving down about 40 km further south-east, into the hilly border villages of Amboori and Mayam, you come across 750 indigenous tribal families who lead a more than marginalised existence on the other side of the river, where a bridge has been a long pending demand.

On a day when the Congress in Kerala has been jubilant over Rahul Gandhi’s candidature from Wayanad, Krishnamoorthy who runs a tea shop near Vellarada, terms it an absurdity. “Some of them (Youth Congress workers) may feel jovial, but not many will fall for such gimmicks. We do see things at close quarters,” said a beaming Moorthy.

Just a few kilometres further down, bordering a Tamil Nadu village of Devikode, you have wall graffiti seeking votes for Kanyakumari’s Congress candidate H Vasantha Kumar, where the Congress, CPM and the CPI are in an alliance. Sudheesh, a youngster employed in a new generation bank, feels development, especially better roads and connectivity, is one crucial missing link here.

“The VSDP has a played a major role in the recent assembly elections, where they could ensure the defeat of sitting MLAs AV George, R Selvaraj and N Sakthan. This time, they have been working hard for the saffron party. Undoubtedly, it’s going to be a direct fight between Kummanam and Tharoor. Going by the current trend, it could be really tough for Divakaran. If there’s a general feeling among voters that the BJP is close to making it, there could be cross voting too,” analyses sexagenarian Francis from Amboori-Koottapp Chappath.

Coming back to the urban voters, the Sabarimala fiasco has made ripples in certain pockets. “Is it something that we can easily forget? Of course, the devotees will use their votes wisely,” warns Unnikrishnan of Thirumala, who feels that the UDF could make it this time.   Tharoor’s campaign is all about ‘Modi hatao, Desh bachao’, while Divakaran is on a reminder spree to jog public memory in terms of development initiatives of the LDF Government. Kummanam, however, plays the Modi card loud hoping to reap rich dividends this time.